How to build cities fit for children

After decades on the margins, child-friendly urban planning and design is emerging into the mainstream. What does this mean for children, for cities, and crucially for the decision-makers and professionals who will shape the futures of both?

My new report Building Cities Fit for Children gives perhaps the first overview of the decisions and programs of those cities that are at the forefront of the movement to reshape their neighbourhoods with children and families in mind. Based on my Churchill Fellowship travels in Europe and Canada, the report takes as its starting point not what I think cities should be doing, nor what agencies like UNICEF are promoting, but what leading cities have actually done.

Rationale
What was it that first hooked cities and their leaders into this topic? Almost all my cities forged links with wider strategic issues. As the Venn diagram below shows, economic and demographic concerns were often to the fore: in an echo of the work of planning expert Brent Toderian, cities saw the presence and well-being of children and families as central to their long-term viability.

Take Rotterdam: a 2006 report showed it was the least child-friendly place in the Netherlands. Facing a brain drain of young families, it invested tens of millions of Euros on the issue. Its programmes have been linked to a revival of the city’s fortunes – though have also been controversial.

Some cities also joined the dots between child-friendliness and sustainability. Oslo’s innovative Trafikkagenten project, for example, harnesses children’s insights into their neighbourhoods to make it easier for them to walk or cycle to school, as part of an ambitious plan to shift away from the car. And many cities included schemes to bring more nature into children’s everyday lives through redesigning play spaces and schoolyards.

Children’s rights were also prominent, with most cities grounding their initiatives in the UN Convention on the Rights of the Child or variants. Public health concerns were less evident – perhaps a missed opportunity, given the global challenges of obesity and inactivity.

People before policies
Turning from vision to action, there was no single template for all cities. However, I saw enough common features to pull together a ‘hub-and-spoke’ model for city-level implementation, illustrated below.

An effective, well-placed official was often the catalyst for change, a finding summed up in the phrase ‘people before policies’. Hence at the centre of my model is a municipal official: someone like Marianne Labre (Ghent’s lead on its cross-departmental child-friendly action plan), Wim Seghers (Antwerp’s play space officer) or John Stark (social planner in the Vancouver metro municipality New Westminster).

These officers were sometimes – but not always – bolstered by strong political support. City of North Vancouver, Ghent and New Westminster exemplify this in the personas of Mayor Linda Buchanan, elderman Elke Decruynaere and Mayor Jonathan Cote respectively.

Meaningful engagement with children was another common ingredient: it was hard-wired into the Trafikkagenten app, and a key building block in the work in City of North Vancouver.

What about the UK?
Turning to the UK, green shoots of interest are appearing. The Welsh Government’s approach to play, which imposes legal duties on municipalities, influenced a landmark 2013 general comment from the UN Committee on the Rights of the Child. And Scotland is currently considering child-friendly planning legislation.

Even in England – a policy desert since the demise of the Labour Government’s play strategy – there are flickers of action, with the Mayor of London inching towards more supportive planning policies.

A unifying theme
My project reveals that cities of varying sizes, built forms and political hues have all taken seriously the goal of building neighbourhoods fit for children. If post-industrial Rotterdam, sprawling Calgary, global trendsetter Vancouver and mid-sized, historic Ghent are all investing time and effort into the idea, it surely has purchase almost anywhere. Its strength is as a powerful unifying theme that builds the case for progressive planning and design, with children’s everyday freedoms a central plank in making neighbourhoods and cities safe, enjoyable, sustainable places for everyone. 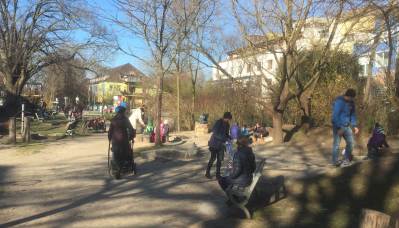 The movement could really come into its own as part of an urban response to climate change and environmental degradation. The reason? At a time of rising eco-panic, it shows that a sustainable urban future, far from being something to fear, is part of a healthier, happier way of life for children and families.

My report starts with a 4-page executive summary to whet your appetite, as well as a deeper dive with details and numbers on each city. Those of you who prefer the spoken word can find a 20-minute talk giving an overview of my findings here.

Own-trumpet-blowing alert
Finally, I am pleased and proud to say that the Royal Institute of British Architects has commissioned me to write a book on this topic. I’m just setting pen to paper, so your thoughts on this report will help me to make a stronger, more persuasive case in the future. I’d love to hear your feedback!

9 responses to “How to build cities fit for children”