Why one city is undergoing a child-friendly revolution

Why would a mayor decide that talking about children is the best way to fix a fast-growing, underfunded, polluted city whose people have a deep distrust for politicians? I spent a week in Tirana last month trying to answer this question.

The Tirana context
First, some context. Tirana, the capital of Albania, is a city of around 1/2 million people (double that figure if you include the wider region). Physically, the city has both Eastern Bloc and Southern European qualities. The city centre is spacious and ordered, taking in wide boulevards, grand squares and buildings, and pleasant parks and green spaces.

Residential neighbourhoods are quite a contrast. They are typically made up of 4-10 storey post-war apartment blocks and informal (and sometimes illegal) infill additions, with narrow (sometimes unsurfaced) streets, informal car parking areas, and very little other outdoor space.

The city’s lively street and café culture has a bustling, Mediterranean feel. But there’s an Albanian twist: many bars and cafés include outdoor playgrounds within their fence lines. This in effect means that families often ‘pay for play’ (in some cases spending a significant proportion of their disposable income in the process).

Tirana has doubled in population over the last 30 years, and until recently this increase was largely unplanned. Explosive growth in car ownership (amplified by their status, in a country where until 30 years ago cars were the sole preserve of the communist elite) has led to heavy congestion, car-choked neighbourhoods and streets, and high levels of air pollution.

The country’s recent history is turbulent even by the standards of post-communist Eastern Europe. After a few years of rampant marketisation, the collapse of several government-supported pyramid selling schemes in 1997 brought the country to the brink of anarchy. The political turmoil continues today with local elections looming. (I can verify this, having heard an angry anti-government demonstration from my apartment.)

Child-friendly by chance
Tirana’s centre-left mayor Erion Veliaj is building a reputation as the mayor who starts with children, as shown by high-profile investment in public spaces and childcare. But his administration initially landed on child-friendliness by chance. After initial success with a rapid makeover of the municipality’s 32 kindergartens (funded largely through support from private businesses) in 2016 his new team turned to proposals for Tirana Grand Park, the city’s biggest public park: specifically, plans for a new playground.

The proposal faced a level of violent opposition that is frankly baffling for an outsider to comprehend. (The administration largely blames partisan politics, while some contemporary online articles also mention environmental concerns and fears about overdevelopment.) In its completed form the playground is a well-designed scheme that complements its wooded context, with a good mix of play offers and some attractive bespoke structures. It is extremely popular (as I saw for myself). 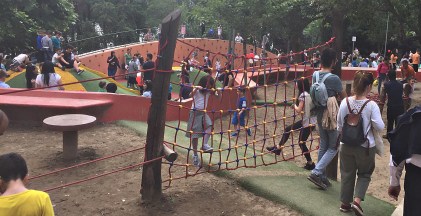 By their own account, the mayor’s team only realised after the fact that this focus on children was gaining public support. Joni Baboçi, the city’s head of planning and urban development, reckons that “doing this was one of the few good things that you could do with no strings attached.” Deputy mayor Arbjan Mazniku told me: “people were saying ‘this is fantastic, but can you do more?’ That’s where we started to figure out the transformative power that working for kids can have.” So a rolling programme was started in the neighbourhoods, supported in part by corporate donations. So far it has completed 44 public playgrounds.

One of Tirana’s new playgrounds

It was no simple matter: although most of these sites had been playgrounds at some point in the past, many had become car parks or the sites of illegal building projects. 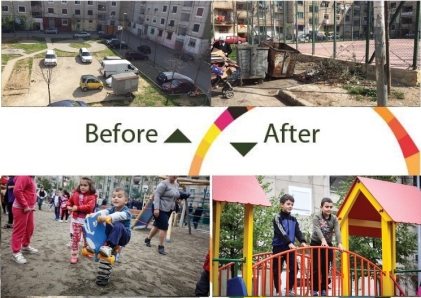 Before & after photos: Allias playground

Alongside the playground programme, an ambitious set of initiatives has been completed, many of which centre on improving public space for children and families. These include:

The mayoralty has also made changes to the development permit process that it claims reduces bureaucracy and the risk of favouritism, as well as increasing revenues. The move has met with criticism, and the administration admits it is at best a short-term solution to the problem of local government funding.

Other relevant policies include the introduction of parking charges (creating a new revenue source while discouraging car use), a ban on plastic bags, a programme of road closures, events and festivals, and the introduction of healthy meals into nurseries and kindergartens.

The presence of some fresh faces in key positions, as well as bureaucratic reforms to encourage initiative, are important parts of the story. So is the pragmatic deployment of municipal resources. A lack of capital funds has left in-house maintenance, technical and public works teams bearing the burden of delivery. 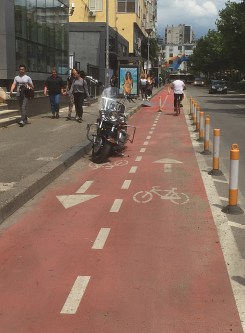 Room for improvement
A desire for rapid, visible impact across the city has been a feature of the work so far. Not surprisingly, this has meant that some schemes are lacking in design quality. Shading is an obvious issue in a place with a Southern Mediterranean climate. Playgrounds and green spaces could do with better boundary definitions, especially to screen them from busy traffic. The cycle lane network could be better connected (and would also benefit from better enforcement to tackle illegally parked vehicles).

I would also like to see more extensive use of hillocks, ditches, changes of level and natural features in play spaces, and greater thought given to the configuration of equipment, landform and seating. Finally, in residential areas, there are opportunities to allow direct access from apartment entrances/stairwells to public spaces without having to cross a road or parking area.

Encouragingly, officials and advisers are open to criticism and keen to learn. Qendra Marrëdhënie (QM: ‘Relationship Centre’) a newly-created NGO headed by Simon Battisti with links to the Harvard Graduate School of Design, aims to upskill the municipality, with a focus on designing for infants, toddlers and caregivers. QM is also supporting a more strategic approach though the use of GIS analysis and the development of performance indicators.

QM is funded by the Bernard van Leer Foundation (BvLF) as part of its Urban95 initiative. BvLF also supports several other key positions within the municipality, including a chief child development officer with a coordination role, and a strategic adviser in the form of Darell Hammond, founder and former CEO of the American community playground NGO Kaboom!

Impact and lessons
The administration claims that citizens are enthusiastic about the changes they have seen. According to Blendi Gonxhja, former head of the city’s recently-created Parks and Recreation Agency, market research shows the measures receive higher approval ratings than anything else the city has done.

The playground programme in particular has led to some unexpected outcomes. “They became places where throughout the day the older generation socialised,” deputy mayor Mazniku told me: an asset in a society where three generations often share a home, with grandparents having a key role in informal childcare. “They have turned into a fulcrum for the community,” he added, “a place where they were proud and felt a sense of belonging.” Cycling levels are on the rise too.

Much of the most high-profile work has focused on the city centre. The city is yet to create the kind of genuinely child-friendly residential neighbourhood that is central to my own vision. Not that this should be a surprise. As Joni Baboçi wrote recently, “It’s relatively simple to design a successful playground, but much more complex to design the whole city to be a playground.”

That said, a pilot ‘infant, toddler and caregiver’ neighbourhood is on the drawing board if the mayor gets a second mandate. Also in the pipeline is a school building programme involving international architects that aims to eliminate ‘double shift’ school days, and to open up schools as community centres. Eleven more civic space schemes are planned, along with a huge new park and feasibility work on a new bus rapid transit system. The municipality is also moving towards a more strategic, data-driven approach.

Transformative potential
Tirana shows how a focus on children’s needs and concerns in planning and design can have transformative potential, even with cash-strapped municipalities in middle-income country contexts. Erion Veliaj is gaining a global profile as a progressive civic leader, and he and his team are outward-looking and eager to forge links with kindred spirits.

Urban policy types will spot parallels with ideas and approaches from Bogotá and Rotterdam, and note the influence of agencies like 880 Cities (whose founder Gil Peñalosa spoke alongside me at the Balkan region’s first international conference on child-friendly cities, organised in partnership with UNICEF).

If the city can maintain the progress shown in its last four years, it could become a global showcase for child-friendly urban planning and design, and a learning lab for other cities.

An interview with the mayor

But it may also have a more profound impact. For Veliaj – a charismatic, determined mayor who is prepared to do things differently – a concern for children is an antidote to the most toxic legacy of communism, namely “the damage it did to people’s psyche: being doubtful of everyone.”

“Kids have no voting record,” he told me. “They have no business interests. They have no dogma. Kids have no religion. Kids have no paranoia.” He has even described children as “revolutionaries in the household”. In a country that just two generations ago was riddled with state-sponsored surveillance, and that is still struggling to build faith in its public institutions, these are potent sentiments.

Comments on this post will be pre-moderated. For an indication of the approach to moderation, see this post from the London School of Economics website (though note that my decision is final).