A vibrant young city is building better neighbourhoods for early childhood. Can it sustain and broaden its impact?

It is not hard to see why early childhood should be a hot topic in Tel Aviv. The city has a booming cohort of young, aspirational parents, and recent unhappy memories of economic decline and falling populations. But why it should latch onto public space – rather than childcare – is less obvious.

The key to the story is a serendipitous, opportunistic partnership with the Bernard van Leer Foundation (BvLF). I have visited three of BvLF’s leading Urban95 cities now (the others being Tirana and Recife). My hunch is that the initiative has had a greater catalytic effect in Tel Aviv than in any of the other cities it has worked in. I visited the city at the end of February 2020 to find out more.

Apartment living has long been the norm in Tel Aviv-Yafo (its full name includes the Hebrew version of Jaffa, the historic Arab port city). Public space is at a premium, especially given the region’s sunny Mediterranean climate.

Car ownership is high, due to the lack of viable alternatives for many. As a result, the city’s streets and sidewalks are plagued by parked cars, and other obstacles like bicycles, bins and electric scooters (which are very popular).

After struggling with suburban flight in the 60s, 70s and 80s, Tel Aviv is now an economic powerhouse. Children under five make up a whopping 8% of the city’s population: higher even than London – itself a youthful city.

While comparatively liberal and left-leaning, the city has high levels of inequality and child poverty, like Israel as a whole. Poverty is widespread among ultra-orthodox Jewish communities, in the established Arab Israeli population, and in recently-arrived migrant and refugee communities in the South, just a mile or two from the stylish apartments and gleaming office blocks of central Tel Aviv.

In 2011 thousands of young Israelis took to the streets to protest about housing and living costs. Childcare and transportation were key concerns.

The national government responded with childcare support for children aged three to six, but not for those under three. Childcare for this age group was expensive, unregulated and sometimes of a lethally low standard.

Parents in Tel Aviv wanted action. But the municipality got bogged down in legal, financial and administrative challenges, and arguments about which level of government (national or local) should take the lead.

Around the same time, BvLF was looking to recruit new cities to Urban95. So in 2016 a hybrid programme was born. Investment in public space and mobility were obvious priorities, given their importance to young families. This ran alongside parenting information (including a new public-facing digital platform), education and support services, and organisational changes.

The BvLF funding paid for a new Urban95 position, taken up by Bosmat Sfadia Wolf (a trained architect) with two additional staff coming in the last year. Crucially, the team is within the municipality in a department that focuses on community support, and that works across the other departments. Smart data, citizen engagement and systematic evaluation are key tools.

Tel Aviv-Yafo is known as a dynamic, innovative administration with a focus on results. Yet intriguingly, one of the first moves of Urban95 went in a very different direction, in the form of a three-day study tour of Copenhagen. This proved to be a powerful stimulus for fresh ideas about the design and management of public space, and also a strong team-building exercise (many of the group still meet).

Nonetheless it was important to show politicians, officials and the public what Urban95 looks like, including experiments, pop-ups and pilots. The visible, physical changes to the city to date include:

One high-profile scheme was the refurbishment of Bnei Dan playground in Yarkon Park, with a budget of 2.4 million shekels (around $700,000 or £540,000). Public engagement included input from over 700 residents. A post-works evaluation found high levels of satisfaction, with praise for the quality of equipment, the seating and the use of water and sand.

Progress on mobility has been slower. The city is taking forward some hugely ambitious strategic transport initiatives. These include a light rail network of at least three lines (one already under construction), major expansion and improvement of cycle networks, and new bus lanes.

These are set to transform the city from a car-dominated place to one where other mobility modes will be the norm. But in doing so, it will face at least five years of disruption.

Urban95 officers have been working hard to influence these plans, building on the concept of the ’15-minute neighbourhood’: a basket of early childhood services within 15 minutes walking distance of all homes.

Last November, the team helped organise a two-day high-level workshop on children and transport with NACTO. A pilot ‘child priority zone’ is planned, which will make tactical changes to improve crosswalks and walking routes in one neighbourhood. Plans are also in place for a pilot programme to improve the entrance areas of four kindergartens so they are safer and offer more space for socialising and play.

Other initiatives being considered include:

Urban95 has led to changes well beyond its initial remit. One was increased interest in – and budget for – general park improvements. An example is Elifelet Park, a brand new park on the site of a municipal parking lot in Florentin, a previously run-down neighbourhood that is now gentrifying.

Former head of parks Yoav Ben-Yehuda told me how his team worked with an energetic local community to design the park. It shows a flexible approach to function, with some segregated spaces (including Tel Aviv’s largest dog park) but also some more open, less programmed areas with playful elements, and a lot of shaded, social space.

The design team was Derman Verbakel Architecture, led by Elie Derman and Els Verbakel. Verbakel, who has also worked on Urban95 projects and fed into the city’s strategic plan, warns against an overly prescriptive approach to design, calling for “a richer vocabulary of public space”.

A new Deputy Mayor post on early childhood development has been created, leading to a greater focus on early childhood services across departmental work programmes. This has included direct action on childcare for children under three (Tel Aviv is the first Israeli municipality to introduce policies and programmes).

While Urban95 has placed Tel Aviv at the forefront of child-friendly planning in Israel, it goes with the grain of national agendas. Civil servants in the Ministry of Housing and Construction – overseeing a huge housebuilding programme to cater for a doubling in the country’s population by 2040 – told me that neighbourhood design policy is moving towards less highway-dominated schemes, with greater emphasis on well-designed, naturalistic public space. While Tel Aviv is not predicted to grow at this pace, it is still planning for around 40% growth in the next fifteen years.

Back to the Future?

One unexpected discovery for me was that the city has a track record in child-friendly, progressive design. Former chief city planner Tami Gavrieli (now also advising Urban95 nationally) told me how in the early 2000s its first strategic plan set out a ‘green skeleton’ for the city, and embraced a cycle network that now extends to over 200 km.

One impressive scheme from 2013 is at Kiryat Sefer park, another former car park where the locals campaigned for over 10 years to secure green space. The delightful naturalistic space, organised around an artificial stream that flows every afternoon in the summer, was designed by Ram Eisenberg, one of Israel’s leading landscape architects. He is advising BvLF’s newly-set-up national steering group for Urban95.

Back in the 1980s Tel Aviv even installed Dutch-style woonerf streets, when it was revitalising its central areas. 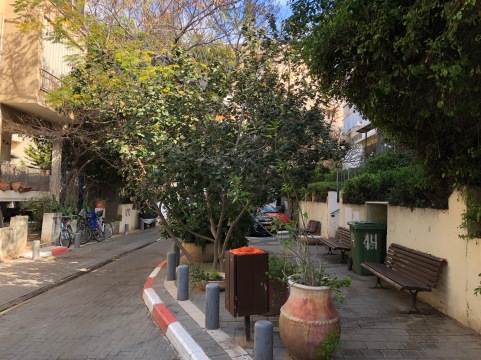 Unlike many cities, Tel Aviv has mostly taken a mixed-use approach to land use planning, leading to compact neighbourhoods and residential housing even in business and retail districts. Its historic links to progressive planning and design go back to the 1925 masterplan drawn up by pioneering town planner and polymath Patrick Geddes, and take in the Bauhaus movement of functional architecture and neighbourhood design.

Everyone involved in Urban95 agrees that – aside from keeping the work sustainable – the biggest challenge is becoming more inclusive: especially in reaching low income groups including Arab and other marginalised communities. Fatma Zibdeh, manager of the Arab-Jewish Community Centre (a non-profit working with the municipality, based in Jaffa), told me that Arab neighbourhoods have big problems with crime and troublemaking in public space, and that the root causes are social, economic and political. She thinks these need tackling first, before any design or planning initiatives.

Arab communities echo cross-community anger about rising housing and living costs, but also point to poor education and job prospects. Some of these problems are deep-seated and structural.

Across Israel, Arab schools receive less funding per head than Jewish ones (though there are signs of improvement). Not surprisingly, they also achieve worse results (Zibdeh told me that only 32% of Arab students in Tel Aviv-Yafo complete a high school diploma, compared to around 75% of Jews).

Arguably even more disadvantaged are the refugee and migrant communities who came to Tel Aviv from 2007-2013, largely from Eritrea and Sudan. Mesila is unique in Israel as a municipal agency that supports these communities. Manager Miri Barbero painted a bleak picture of families living in a tough, overcrowded part of the city with longstanding social problems around poverty, drug use and prostitution. Her priority would be to open up community centres with safe outdoor space for children and young people.

In just three years Urban95 – arguably the latest in a long tradition of humane, progressive urban planning approaches in Tel Aviv – has transformed dozens of the city’s parks for young families. It has also triggered wider improvements in public space, alongside a suite of programmes and improvements to services (not discussed in detail here).

Major success factors included embedding a highly effective officer and team within the municipality, winning over key senior officials (especially the CEO Menachem Leiba, who felt a personal connection to the issues having become a first-time grandparent) and building a supportive team across different departments. The key organisational challenge now is to embed new approaches so that they continue when those officials move on (with Sfadia Wolf already having been promoted to lead her department).

If Urban95 succeeds in becoming part of the municipal DNA –crucially, influencing Tel Aviv’s transformational mobility plans – the city could become a global benchmark for child-friendly planning. On a more downbeat note, it is also likely to confirm that tackling structural inequality involves more than planning and design. It requires economic, social and perhaps even political reform.

Much of the material here is taken from the report by Gordon LaForge: ‘City Hall Embraces Early Childhood Development: Reaching An Underserved Population In Tel Aviv, 2016–2019’ (2019) Innovations for Successful Societies, Princeton University.

I am happy to receive relevant comments. I will be pre-moderating comments from first-time commenters. For an indication of the approach to moderation, see this post from the London School of Economics website (though note that my decision is final).

5 responses to “A vibrant young city is building better neighbourhoods for early childhood. Can it sustain and broaden its impact?”