How a focus on child-friendliness revived one city’s fortunes

I have been aware of Rotterdam’s child-friendly cities initiatives for at least ten years. It is the most ambitious I know, with the biggest budgets and the clearest focus. I have visited projects in 2014 and 2017, and have been impressed by what I saw. 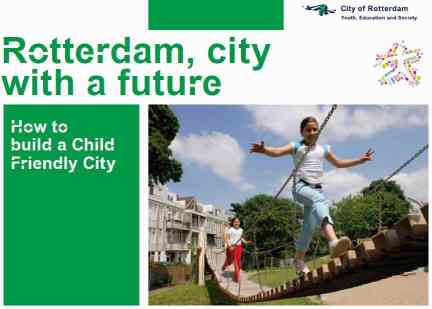 So I was excited to be back in the city last month as part of my Churchill Fellowship travels, and eager hear more of the city’s story. And I quickly learnt one thing: Rotterdam’s push to become more child-friendly is deeply linked to its history, economy, demographics and built form.

Rotterdam has long been an industrial, port city made up of diverse, largely working class communities. The vast majority of the population lived in social housing (around 65% still do – high even by Dutch standards). Housing that was often cramped, old and run-down.

Rotterdam is also – unusually for a Dutch city – highly car-centric. Its historic centre was all but destroyed during the Second World War, and post-war reconstruction followed a car-oriented path that has only recently been seriously challenged.

By the turn of the millennium, the city’s leaders realised that family flight was draining the city of energy, creativity and a long-term tax base – and giving it a terrible public image. Being labelled in 2006 the worst Dutch city to bring up a child proved a catalyst.

Chief urban planner Mattijs van Ruiven told me that Rotterdam’s strategic goals are to have “a strong economy and build an attractive city.” And its child-friendly initiatives align closely with these, with their aim of persuading affluent families to stay and put down roots in the city.

These initiatives came in two phases. Phase 1 – let’s call it CFC 1.0 – saw the city invest around Euros 20 million (£17 million; $24 million US) between 2006 and 2010. Much of this investment was in a single neighbourhood, Oude Noorden, a diverse, largely residential area just outside the city centre.

CFC 1.0 aimed to make schoolyards and public spaces greener, more playful and more sociable, to improve walking and cycling routes and networks, and to increase the supply of private housing suitable for families. 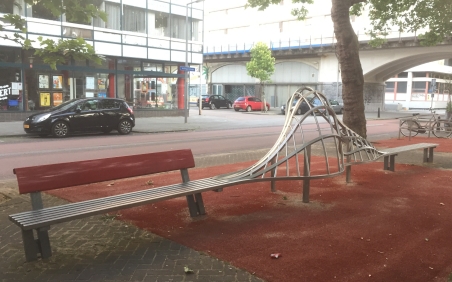 Many of the city’s parks, green spaces, schoolyards, squares and streets were redesigned. These included a symbolic ‘car-park-to-play-space’ transformation that is becoming part of the urban regeneration playbook. 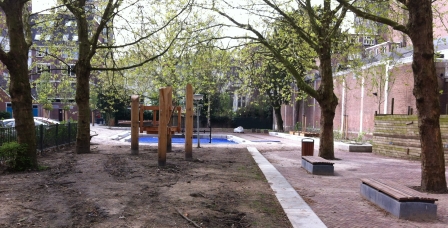 CFC 1.0 also led to the publication of new play space planning norms [Dutch pdf link], intended for citywide application and still in use today. One norm specifies that residential streets should have playable sidewalks at least three metres wide, preferably on the sunny side of the street. I saw several streets in different parts of the city that had clearly been redesigned along these lines, losing around half their parking places in the process. 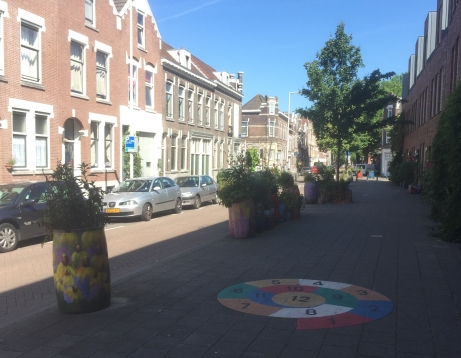 CFC 2.0 was a four-year, Euros 7.5 million (£7 million; $9 million US) programme the city calls ‘Kansrijke Wijken’ or ‘Promising Neighbourhoods’. It began in 2014 and has just about run its course. Like CFC 1.0 it is aimed at families with children. But it has a broader scope, in part in response to an independent evaluation [Dutch pdf link] of the first iteration.

Taking a leaf out of the playbook of Vancouver’s former chief planner and leading urbanist Brent Toderian, it tackles education as well as housing and public space. It also covers a greater area: nine city fringe neighbourhoods in total (with three receiving more attention than the other six).  And it is looking at programming and events as well as physical changes.

The planning norms developed under CFC 1.0 were refined and applied across the target neighbourhoods in CFC 2.0. Planners analysed each neighbourhood to map parks, play areas and other public spaces, streets (showing both high-speed streets and streets with wide pavements suitable for play) and major barriers. Just as in Ghent and Antwerp, this neighbourhood-level GIS data helped to plan improvements. 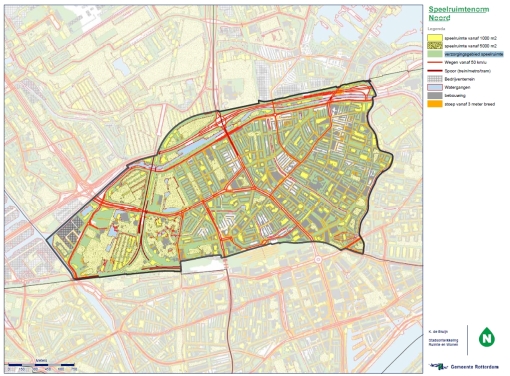 CFC 2.0 has a more participatory emphasis than its predecessor. Promising Neighbourhoods lead officer Marielle Heijmink told me “it is a project that you have to do with the inhabitants.” There are more co-creation initiatives, such as Droomstraat (dream streets), which harness individual and community creativity, rather than relying on a fixed model like the play streets I saw in Ghent and Antwerp.

Children have been directly involved in some Droomstraat projects – a move supported by project officer Jan van der Wolde, who told me that they bring a positive mindset and are more open to ideas. 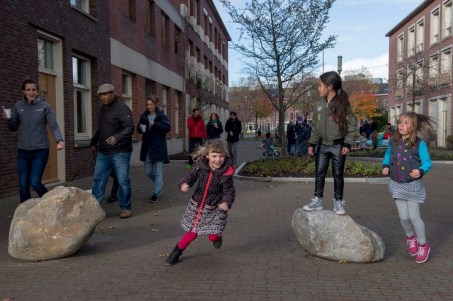 There is also a shift away from conventional playgrounds. Liesbeth van Ommen-Koen, a landscape architect who is leading on the ‘Kom Op Naar Buiten’ or “Lets go Outside! initiative, told me that the goals are to make more varied offers in public space, to create more free open space, and to get people of all ages to stay longer.

One factor here is that Rotterdam has around 1,400 play spaces (several times as many as a British city of equivalent size and proportionately more even than other Dutch cities). This gives a lot of scope for change. Liesbeth van Ommen-Koen’s team is working on around 50 projects a year.

Rotterdam has other policies and programmes that, while not under the Promising Neighbourhoods umbrella, go with the grain of child-friendly urban planning. One example is transport and mobility, which is correcting decades of car-centric planning and focusing squarely on walking, cycling and public transport. Strategic mobility officer Martin Guit told me that the budgets for cycling infrastructure are higher than car infrastructure.

One intriguing fact about Rotterdam’s work on child-friendliness is the role played by a unique local non-profit organisation, Speeldernis. Speeldernis is a play-oriented environmental centre set up in 2002 and funded through the city and other sources. Each year thousands of children, families and school groups come to play in and explore its subtly naturalistic site and take part in programmes.

Speeldernis has a high profile in the city and beyond: it was one of the inspirations behind Ghent’s natural schoolyard programme, for example. Over the years it has advised on both public space and schoolyard projects, as well as inspiring schools and communities through visits.

I visited Al Ghazali Islamic Primary School, whose schoolyard had been redesigned in a project delivered by the NGO Jantje Beton, with input from a ‘schoolyard action team’ of children. They initially just wanted more space for soccer; it was a visit to Speeldernis that prompted them to change their minds and embrace a more naturalistic design.

Rotterdam is unashamedly engaging in state-sponsored, family-friendly gentrification (a term that is perhaps less loaded there than in some other cities). What is more, on its own terms it appears to be working, with significant growth in numbers of affluent families in target areas. 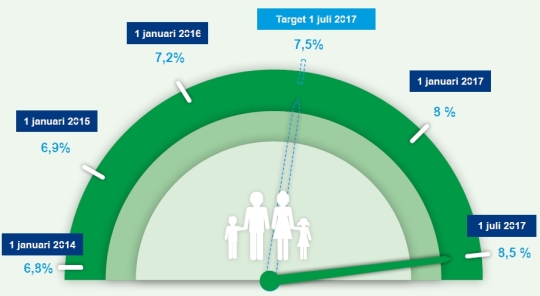 Increase in numbers of affluent families in target areas 2014-7

Some of these changes have raised concerns, and even protest. The city has been accused of deliberately pushing out poor families – an accusation I have discussed.

The officers I spoke to denied that this was the case. And I saw for myself that some of the projects supported by the programme were aimed at minority communities in poor areas (including the schoolyard above).

[Update July 2019: A 2018 study in 3 of the targeted neighbourhoods supports a picture of largely positive change. It showed no sign of displacement, and found that both original inhabitants and newcomers welcomed the changes. See the postscript of my post on gentrification in Rotterdam.]

Overall, I heard a lot of optimism from my interviewees about how the city has changed. Indeed Rotterdam is now – somewhat to the surprise of some – facing similar housing affordability pressures to other cities in the Netherlands.

Rotterdam’s sustained focus on becoming more family-friendly has had a measurable impact, and helped to turn the city around economically, environmentally and culturally. But what of the future?

Picking up on questions about social equity, several interviewees argued that the focus on ‘promising neighbourhoods’ meant that other areas could be left behind. In Rotterdam, this means much of the South of the city, which is economically, culturally and physically disadvantaged. Some officers also talked of a ‘missing middle’ and of the need to give more attention to this group.

The political context is uncertain. I visited just before local elections. I must confess I failed to get under the skin of Rotterdam’s politics – and those elections meant I could not meet any elected politicians.

This English-language review of last month’s election results paints a worrying picture of a city fundamentally divided by concerns about identity and immigration. But I was left with a less negative impression. Certainly the officers I spoke to had little doubt that the city would continue to strive to be more attractive and livable for children and families.

My experience of Rotterdam has always been of a city with a visibly diverse population who seemed largely at ease sharing and enjoying its streets and public spaces. This is surely part of the vision of a progressive programme of child-friendly urban planning. Is it naive to hope that it could also be part of its legacy?