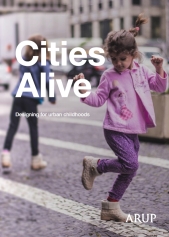 A new report from planning and built environment firm Arup argues that children should be central to good urban planning and design around the world.

Cities Alive: Designing for Urban Childhoods takes its cue from the oft-quoted maxim of Bogotá mayor Enrique Peñalosa that the child is an indicator species for cities. Part of Arup’s Cities Alive series of publications, it shows that child-friendly urban planning is about much more than providing playgrounds. Rather, it is part and parcel of making cities more livable, sustainable and successful for all citizens.

Designing for Urban Childhoods is squarely aimed at the planning, developer and urban policy communities. It is strong on the economic case, arguing that cities who do not address the needs of children risk a ‘hollowing out’ effect as families move away.

Health, social, environmental and equity themes are also to the fore. The damaging impact of traffic, air pollution and crime are all highlighted. So are the problems that car-centric cities and poor urban planning create for all children, but especially those living in poverty.

Drawing on the work of Finnish urban planning academic Marketta Kyttä, the report argues that children’s everyday freedoms – the chance to play, spend time with friends, have regular contact with nature, and get around their neighbourhoods – are powerful measures of how well a city is performing. 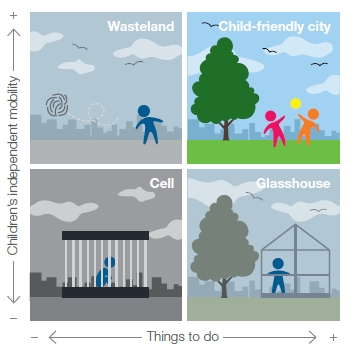 While recognising the value of involving children and young people, the report also invites advocates to move beyond formal participation projects and focus on improving the everyday lives of the whole of a city’s young population. Stating that “interventions at the neighbourhood scale offer the greatest potential”, it sets out a ‘children’s infrastructure’ approach that embraces streets, squares, parks and green spaces, as well as walking, cycling and public transport. It concludes with a menu of ideas for practical action.

“Interventions at the neighbourhood scale offer the greatest potential.”

Designing for Urban Childhoods includes 41 global case studies that exemplify the children’s infrastructure approach. Some, like Rotterdam’s ambitious child-friendly cities strategy, will be familiar to advocates (and are included in my Churchill Fellowship project). But others may be less well known.

For example, in Bogotá planners and kindergarten managers are working together to pilot children’s priority zones, with funding from the Bernard van Leer Foundation’s Urban95 initiative. In South Korea, a month-long experiment changed an inner city neighbourhood into a car-free zone. Residents subsequently voted to impose permanent parking controls, speeding restrictions and car-free weekends. In Salinas, California, the local community restored the 64-acre Natividad Creek Park, turning it into a refuge for young people from gangs and violence. 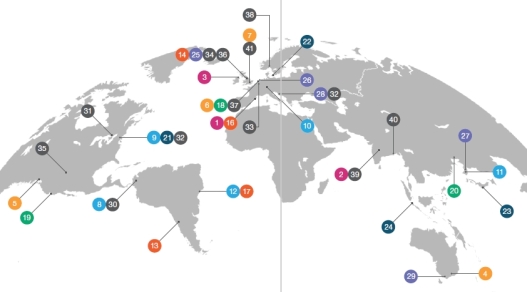 As an expert adviser for the report, and the author of its foreword, I hope that Designing for Urban Childhoods will reconnect the urban planning world with the goal of improving the lives of ordinary children and families. This was once a central aim of visionary urban thinkers like Ebenezer Howard, Jane Jacobs, Kevin Lynch (founder of the first United Nations programme on the topic nearly 50 years ago) and Colin Ward. But the topic has been sadly neglected in recent decades (Ward’s 1978 classic The Child in the City does not even have its own Wikipedia entry).

The fact is that the prospects for the world’s cities and its children have never been more closely intertwined. In just over a decade, the majority of urban residents will be children. And by 2050 around 70% of the world’s population will live in cities.

In responding to this global challenge, Designing for Urban Childhoods takes the language and tools of progressive urban planning to build the case for placing children at the centre of decision-making. I believe it will prove a powerful catalyst for action, and invite you to help spread its message far and wide.