Calgary is the Canadian big city that looks and feels most like many US cities: sprawling, ever-expanding, and hugely car-centred. The very idea that the built form of the city could be great for children is likely to prompt a raised eyebrow from urban planners, if not outright derision.

I have just spent a week in the city, at the International Play Association conference, and then interviewing people and visiting sites as part of my Churchill Fellowship project looking at child-friendly urban planning. And my top-of-the-head response is that those urbanists would not be far wrong. But could this be about to change?

I’ll come back to that later. First, a thumbnail sketch of the city’s built form. Three broad types of residential neighbourhood form a classic urban typology for the city.

The central downtown has a grid street pattern of mostly high-rise residential and office/retail blocks. While the condos are often small (and pricy), nearby urban parks and the green spaces around the Bow River – never far away – provide some breathing space. 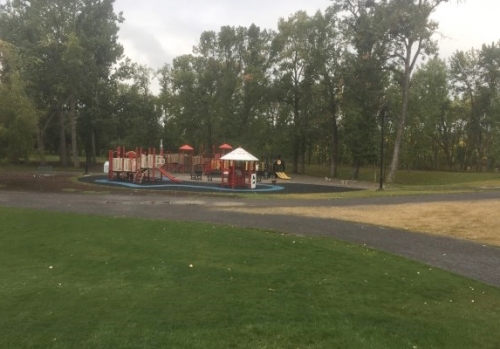 The next ring out – built in the beginning and middle of the last century – takes the form of grid-pattern inner city suburbs of single-family homes and small apartment/townhouse blocks, with a fair amount of green space (public and private) and a sprinkling of shops, small businesses and public services including (usually) nearby schools and childcare.

A few areas like Sunnyside/Kensington (where I stayed) and Inglewood show signs of gentrification (and of children’s presence). More affluent, younger people and families are settling amongst the empty-nesters, attracted by the character and diversity of these neighbourhoods, and their nearness to downtown.

Head further out still and you reach the suburbs proper, where most Calgarian families live.  Built from the 80s to the present day, these are almost entirely residential, and many have resident populations that are very homogeneous in socio-economic terms. Road layouts are usually tree-like (cul-de-sac and branches) with single family homes and/or townhouses/low rise blocks. Sometimes just one or two roads in and out connect to the highway, creating a ‘gated community’ feel even if there is not a physical gate.

These suburbs often include a central park, sometimes with a lake, an uninspiring play area and perhaps some other leisure facilities (some or all of which residents may have to pay extra to be able to access). But if you want even a pint of milk or a popsicle, you will likely have to hop in the car and head for a big box store.

Calgary also has the most extensive network of pathways and bikeways in North America. But the sheer distances between many neighbourhoods and facilities, and also parental safety fears, mean that they are not heavily used by children or young people as part of their everyday travel patterns (though they may be for family leisure trips).

Aside from built form, two other physical factors shape the everyday freedoms of young Calgarians. The first is weather. For 4-5 months it can get very cold – minus 20 degrees is not uncommon. While outdoor winter sports are popular, indoor leisure is a big feature of Calgary life, often revolving around huge recreation centres (with equally huge car parks).

The second physical factor is schools. Specifically, bussing. Calgary has doubled in population in 30 years and is the fastest-growing city in Canada. It has struggled to keep up with the demand for school places, especially in the outer suburbs.

Poor planning means families may wait years for that promised new school to be built. In the meantime, kids are bussed to far-flung places. And journeys can take up an hour each way.

You will not be surprised to hear that my adult interviewees tended to agree that physically, Calgary is not very child-friendly. The dominance of the car, the lack of variety in the outer suburbs and the distances to – well, anywhere kids might want to get to – do not add up to a great set of accessible neighbourhood affordances.

Some of the half-dozen young people aged 11 – 13 I spoke to in a focus group also felt their neighbourhood was boring. But others found positive things to say about local parks (although one participant bemoaned the fact that some play equipment she liked was taken out of her local park, apparently after an accident).

So in Calgary right now, what interest is there in the idea of child-friendly urban planning?

One potential catalyst – and the big news for play advocates – is that the city is developing a visionary potentially innovative outdoor play strategy, with support from the Lawson Foundation. Just a couple of weeks ago, over 25 organisations signed up to a Play Charter for the city.

Yet the focus of this strategy is squarely on programmes and supervised services (such as a playwork-inspired mobile adventure playground). Improvements to public playgrounds may form part of the mix. Several of my interviewees spoke about moving towards more naturalistic playground design ideas, though as yet there are few completed schemes.

But playground design has not emerged as a priority for the play strategy. And although it is early days, as yet there is little sign that it is reaching far beyond programming (the urban planner from the City who I interviewed had not heard about it).

The other potential hook for child-friendly urban planning is, not surprisingly, from the planning and transportation side. Child obesity and physical inactivity are major public health concerns in Calgary, across Canada, and of course elsewhere. And decision-makers are waking up to the growing evidence base (some of it grounded in robust local research) that the built environment is a key factor.

To take one example, urban planners are using health impact assessment tools to influence one new community that is in the pipeline, Nose Creek. Likewise the Green Line, Calgary’s third major tramline, is being talked of as not only a transport infrastructure project, but also a city-shaping tool. New buildings, services and public space projects will be planned around the new stations in a form of transit-oriented development.

A pairing of real energy around outdoor play with serious activity on health-focused urban planning could be a powerful force for change. And it is beginning to happen. For example, the health-focused non-profit Vivo – which is heavily engaged in the outdoor play strategy – is also feeding into the planning for Nose Creek. But my hunch is that unless the links between planning and play advocacy are strengthened, the city will continue to grow in ways that favour car drivers over children’s everyday freedoms.

Notes and acknowledgements
This post shares my initial thoughts. It should not be read as a definitive account or assessment. Nor should it be seen as representing the views of any of my interviewees. Though I do want to thank them all: Katie Black (Director, Calgary Neighbourhoods), Anne Charlton (Director, Calgary Parks), Kurt Hanson (General Manager, Calgary Community Services), Dr Peter Sargious (Alberta Health Services and Calgary University), Joyce Tang (City Planner, City of Calgary), Cynthia Watson, Matt Leung and Alison Stutz (all of Vivo), and also Andrew, Lida, Desiree, Maria, Sami and Taylor, who attend Bob Bahan Out of School programme. Thanks too to Tami Nisbet and colleagues at this programme for their help and support with the focus group. Finally an enormous, personal thanks to Heather Cowie who set up all the interviews and visits as well as being interviewed herself, even though she was also the City’s frontperson for the IPA conference, and somehow doing her day job as a regional manager in the City’s Recreation Department.

Sadly upcoming elections meant that I didn’t get to meet Mayor Nenshi or any other politicians personally – though it is perhaps significant that he did give opening keynotes at both the IPA and Walk21 conferences which took place in Calgary within days of each other.

3 responses to “Is Calgary ready for child-friendly urban planning?”