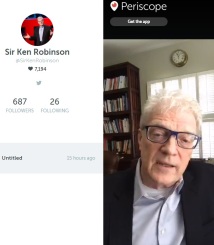 Educationalist Sir Ken Robinson, known to millions for his work on creativity in schools, yesterday shared his thoughts on outdoor play.

The 20-minute talk, in a video recorded as part of the Dirt is Good campaign sponsored by Persil (in the UK) and Omo (in many other countries), gives some powerful messages to parents about why play matters for children’s development and learning. This post shares some edited highlights from the talk. You can stream the full talk at the end of the post.

Sir Ken starts by stating that “play in all its forms isn’t some frivolous waste of time…  that should be put to one side if there are more important things to do.” He continues:

Play is a highly beneficial and deeply natural way in which kids learn… Play has deeply important roles in the development of intellectual skills, in social skills, in developing empathy, in stretching our imaginations and exploring our creativity.

Yet despite this, Sir Ken says, children are playing much less than they used to. The Dirt is Good campaign surveyed around 12000 parents in 10 countries. The top-line finding – described by Sir Ken as ‘startling’ – was that the average child spends less time out of doors now than the average high security prisoner. In the UK, this means nearly three-quarters of children spending less than an hour a day outside.

Sir Ken explores why children playing outdoors less than they used to. He focuses on four factors. The first is parental anxiety. He says:

Parents these days seem to be a good deal more anxious than they used to be… They worry about the environments they might be playing in. The evidence of course is that crime rates … are in many cases going down. The publicity of these dangers is often greater than the actual danger itself. But nonetheless parents are anxious and we understand that.

The second factor is the decline in some areas – especially cities- in places to play:

The vast majority of children now live in cities… now we are cramming much more people into cities and these cities are plagued with all kinds of other pressures – traffic not least. Public spaces are important and in some cases these have been neglected or are in decline.

The third factor Sir Ken discusses is school recess or breaktime – and Sir Ken cites UK research by Peter Blatchford at the Institute of Education showing that in the UK, outdoor play in schools has been cut in half in recent years.

The fourth factor is technology. Sir Ken is careful to emphasise that he is not against technology, and neither is the Dirt is Good campaign. He says, “the issue we are pressing on is balance.”

Explaining his own involvement in the campaign, Sir Ken says:

In the last part of the interview Sir Ken answers questions parents have put to him about the campaign. Here are some of these, along with edited responses from Sir Ken:

Q: how much time should my child be playing?

A lot of this is about paying attention to your children. It’s hard to overestimate how valuable it is to your kids that you spend time with them just to be with them: just to play and fool around with them – to be focused and to give them your attention. It might just be ten minutes here and there… It’s about realising that these are very important relationships. It’s important not to ignore the factors that make life worth living.

Q: do you think schools should be doing more to support play?

Yes. Our kids are spending far too much time being sedentary, sitting down, being physically inactive when they should be up and about, moving, doing practical activities and playing. Play is a fantastically serious activity. We really want to get this higher up the priority list and say this is a very important part of the school day.

Q: my kids don’t want to play outside any more. How can I make them?

Let me say first off that we are not talking here about putting your kids at risk. We are talking here about safe play, in areas that are supervised. But also about unstructured play. We are urging people in positions of public policy to recognise the importance of playgrounds. We want children to be safe, but not necessarily constantly organised.

Q: do you think children should start playing unsupervised in today’s world?

Well as I say, not necessarily unsupervised. Yes, unstructured, at times, that’s important. We all want our children to be safe but we also want them to be able to take risks: to fall down, get up, graze their knees and dust themselves down and carry on again. These are ways that children learn to be much more resilient and independent. There is a point at which overprotecting your children becomes counterproductive.

It’s all part of life’s lessons that you do need to figure out where the boundaries are and the risks you can take and in the nature of it kids need to get dirty and that’s why we call this dirt is good. It’s about striking the right balance between safety and overprotectionism.

Sir Ken’s closing thoughts emphasise the relationship between play and what might be called a ‘good enough’ childhood (to adapt a phrase from the influential child psychiatrist and play advocate D W Winnicott):

Children live in challenging times and so do we, there’s no question of it, the pressures are intense… But in the middle of it there are some principles that hold good about the nature of childhood and what makes it a valuable one and an effective one.

I am not saying I agree with everything Sir Ken says in this video. Picking up on the idea of a ‘good enough childhood’, I would like to have heard more about the value of play for children in the here and now, as well as for their longer-term development. And I question the emphasis on the need for adult supervision. For me, debates about adult supervision are best placed in the context of children’s growing independence. We grown-ups also need to value play that is to all intents and purposes unsupervised – or at least minimally supervised – by adults.

That said, I am delighted to see Sir Ken taking up the cause of outdoor play with such energy and clarity. This could be a pivotal moment in the global movement to expand children’s horizons. I cannot think of another educationalist who has anything like his public profile. Moreover, his fierce criticisms of mainstream educational policy, with its narrow curriculum and high-stakes testing regimes, will chime with many play advocates.

This is why, as part of the team that will be working on the Dirt is Good campaign, I am happy to give a flavour of his views here (and apologies in advance for any – hopefully minor – inaccuracies).

Note and acknowledgement: the talk was originally streamed on Periscope on Monday 4 April. My original post has been edited to give the new location. Thanks to Cath Prisk for her help in getting the video file uploaded.