This post shares an idea from a parent who was frustrated that her kids were finding it hard to have much fun in their local playgrounds. I’ve called it the Mary Poppins playground kit, for reasons that should become obvious. 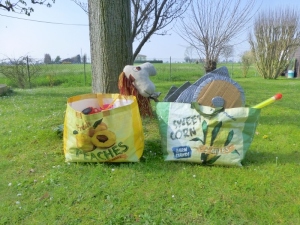 At the end of this post, I will say more about why I like the Mary Poppins playground kit so much. First, the idea itself, in the words of the parent herself (whose chosen name is Djindjer):

I have a son who seems to need free play far more than most, and who craves the company of other children like nothing I’ve ever seen before. We recently moved, and I was determined to give those things to him as best I could.

The playgrounds where we live are so neglected (due to lack of demand, I assume) that most of the equipment is usually broken. I also noticed that the kids who we met were micromanaged by their parents to an outrageous degree. As their parents tried to keep them as close to the parental orbit as possible, they didn’t socialise much with each other.

So I came up with the “playground kit” idea. For two years, as often as I could, I took the kids to the same large, but often fairly empty playground with two enormous shopping bags in hand. In the bags were:

– along with whatever else tickled our fancy that day.

And it worked. My kids would offer toys to other kids close by and draw them into the fun. A favourite activity was that an older child would blow bubbles from the top of the slide while a dozen little ones would run around beneath screaming and slashing at them with the paper swords. Another was to shoot at trees with the bows and arrows, which my son was good at and enjoyed showing other kids how to do. 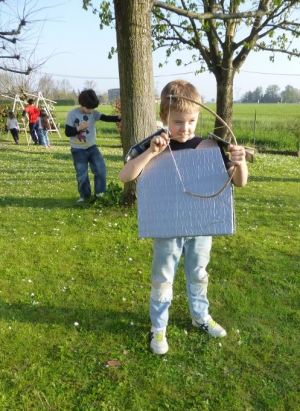 I had made a play quiver from an old belt and a piece of felt, which he would strap onto someone ceremoniously – everyone loved that. I myself would hang back around a tree in the centre of the park on a bench with treats in my lap for anyone who wanted one.

The most interesting thing to watch was the parents. At first I worried that mothers and fathers would be angry with me for drawing their kids into “violent” games. In fact, no one ever pulled their children away or said anything negative to me.

Quite a few would thank me on their way out. Perhaps this was because of the awkwardness of saying anything, but – I truly believe – also because there was really never any actual danger involved and everyone could immediately see that the kids were just having fun.

The kids loved the armour the best and would sometimes see us coming from a long way away and stand at the gate of the playground to be the first to swoop down on it. 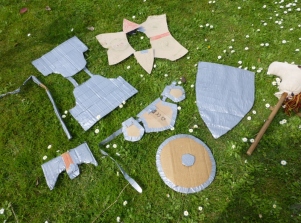 Sharing was easy. When others saw my son with his armour on, happily swinging his sword about, they’d come over and peek into the bag out of curiosity. I’d wave them to go ahead and take whatever they wanted, and they were never hesitant to do it. They’d turn the top of a wishy-washy, practically unusable, “safe” plastic slide in no time into a fortress to be defended (bubble bombs!)

Luckily, my son is extremely aware of what he’s doing with his “weapons”. Mothers who seemed leery or unhappy at first soon settled down as they understood that what he was teaching their children was more like choreography than actual fighting. My son has very great difficulty communicating in any other way than through physical play, so this sort of thing was really important for him to feel socially accepted at some level.

One important detail in this story is the choice of playgrounds. There was a big central one close to where we lived where there were actually a lot of people – perhaps too many. I worried that the sword swinging could cause an accident and we would become the centre of something ugly and it would defeat the purpose.

Some of the other parks were too empty for us to have a hope of much company. So I chose an empty park just behind the largest grocery store around, where there were a lot of “passers through,” walking back to their cars or to the apartment buildings nearby.

It was interesting to see how parents who had only intended to stop for 5 minutes while their kids tried out each piece of broken equipment (there was actually a huge sandbox with no sand in it, if you can imagine that) would end up staying a couple of hours and, looking relieved to have their kids engaged and out of their hair, would happily chat with other parents.

Parenting becomes a breeze if you don’t have to be everything for your kids all the time.

I’m sure many parents have a bag of favourite toys ready by the front door, or a bat-and-ball in the car boot. We certainly did. But Djindjer’s approach goes well beyond this.

Her over-riding aim was to draw other children into playing with her children. She and her kids pursued this goal with enthusiasm, creativity and playfulness (while taking a healthy and balanced approach to risk).

Anyone versed in playwork will recognise some of the ideas that Djindjer put into practice. These include: the introduction of loose parts, the use of play cues and play frames to increase the affordances of a play space and the play types that it supports, and an appreciation of rough-and-tumble play.

The Mary Poppins playground kit also addresses a key question posed by many parents: “what can I do to improve outdoor play opportunities for my children?” While Djindjer’s answer is perhaps a little unconventional, it does not seem such a big ask for parents – indeed according to her, it makes life easier.

The idea invites parents to look beyond the boundaries of their own family lives, and to take the kind of collective action that is surely essential if outdoor play is to be revived. It subtly and gently bridges the gap between the nuclear family – ‘what I can do for my children’ – and the immediate community – ‘what we can do for the children in our neighbourhood’.

What do you think? I would love to hear if you are as keen on this idea as I am. Even better: if you are a parent reading this and are willing to give it a go, let me know how you get on. All comments gratefully received, as ever.

Acknowledgements: I am very grateful to Djindjer (who wants to remain anonymous) for agreeing to let me share her idea, and for generously giving her time and thoughts by email. Thanks to her, her family and her friend for the images. Her idea was first shared as a comment on an article by US psychologist and play advocate Peter Gray that explored the ‘Playborhood’ model promoted by US play advocate and parent Mike Lanza.