The outdoor child: doomed to extinction?

Every year since 1979 there has been a Big Garden Bird Watch, a UK-wide survey organised by the Royal Society for the Protection of Birds. I can’t help wondering about a survey of a different species: a Big Outdoor Child Watch.

We can be fairly sure what it would find. Chicks are now pretty much extinct, outside their own nest areas and a small number of reserves. Juveniles – a common sight up until the 1970s – declined in numbers throughout the 1980s and are now rarely seen away from their parents. And adolescents, though not yet endangered, are seen as pests and controlled accordingly. In sum, children are fast disappearing from the outdoor environment, even though it is still their preferred habitat.

The natural history of children is apparently less noteworthy than that of birds. So there is little hard data around. We do have the classic One False Move, which studied how children get around their neighbourhoods. It suggests that, in a single generation, the “home habitat” of a typical eight-year-old – the area in which children are able to travel on their own – shrank to one-ninth of its former size. 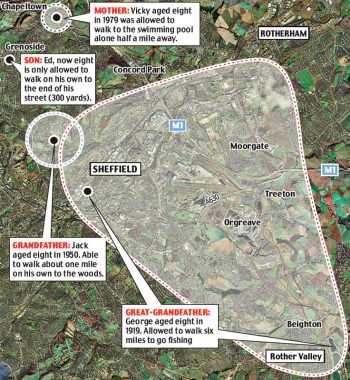 The shrinking horizons of childhood

Do not underestimate the significance of this change. For the first time in the 400,000-year history of our species, we are effectively trapping children indoors at the very point when they are primed to get to grips with the world outside the home.

Taking an ecological perspective dramatizes these childhood changes.  It also sheds light on their consequences. In other species, like chimpanzees, being reared in captivity leads to dramatically worse outcomes.

How relevant is this to our own species, you may ask? Supporting evidence is not hard to find. Leading public health experts agree that the decline in outdoor play is a major cause of childhood obesity. Indeed William Dietz, a director at the US Centers for Disease Control and Prevention, has said: “Opportunities for spontaneous play may be the only requirement that young children need to increase their physical activity”. There are also worrying downward trends in teenage adolescent mental health, as shown in a new book published this very week.

The shrinking horizons of childhood are, in part, a side effect of wider social changes. Smaller families, more parents working longer hours, car-dependent lifestyles and increasingly fragmented communities have left children with fewer friendly faces to look out for them. More children have their own bedrooms, and the entertainment industry makes ever more seductive indoor offers to stave off cabin fever.

Fear plays a key role: not only parents’ fears of traffic (probably justified) and strangers (arguably not), but also children’s fear of crime and bullying. Parents fear being judged harshly if their kids are seen out of doors unaccompanied. There is also growing hostility to the very presence of children in public space. Behaviour that would a few years ago have been “larking about” is now labelled antisocial.

As it is with birds, so it is with children: their presence all over the place, in diversity and numbers, is a sure sign of a healthy habitat. To achieve this, our priorities need to change. This in turn means a change in adult attitudes. And that, the pessimists say, is just not going to happen.

I think the pessimists are wrong. Check out the work of US journalist Lenore Skenazy. Her story began when she let her 9-year-old son go home on the New York Subway on his own. She found herself the centre of a media storm, and her Free Range Kids movement is now a global phenomenon. A UK campaign has even stolen Lenore’s strapline.

Or check out Mission:Explore, the guerilla geography website that is using digital technology to switch children onto the amazing, everyday world beyond their homes and classrooms. Or the international movement to reconnect children with nature. Or the UK-based Playing Out initiative that is working to open up streets for play across the country. Why, even the Bible takes an optimistic view.

When it comes to the outdoor child, these are exciting times. Sepia-toned memories are being dusted down, rose-tinted spectacles are being removed, and serious action is being taken. For growing numbers of people around the world, the noise of children playing outside is not a sign of neglect, but a sound to raise the spirits. Like the first cuckoo of spring.

This is an edited, updated version of an article published by the Guardian in September 2004.

8 responses to “The outdoor child: doomed to extinction?”