Is technology the enemy of an outdoor childhood?

Technology has an ever greater role in children’s lives, and its effects are the focus of ever more heated debate. It is easy for advocates of nature, outdoor play and everyday childhood freedoms to think that screens and gadgets are our enemy. But the truth is that things are a little more complicated than that.

Let’s start with some context, and some observations about how children engage with the world around them. Right from birth and throughout childhood, children are naturally curious, and have an appetite for experience and adventure. Not for nothing is the adjective ‘boring’ one of the most potent in a child’s vocabulary.

The young of our species are nature’s most efficient learning machines. And children have evolved to make sense of the world multi-modally. Real-world, hands-on experiences – those that involve all their sensory modalities simultaneously – have unparalleled power in forging an understanding of the objects, people and places around them.

Think of a child climbing a tree. 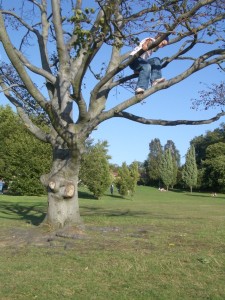 Her whole body, mind and senses are working in unison. Her progress is helped by split-second, largely subconscious feedback loops that integrate information from the feet, fingers, arms, legs, eyes, and ears. Her decisions and actions are shaped by complex, highly sensitive balance and kinaesthetic systems.

Children who are stuck indoors in front of screens miss out on the power of these multi-modal experiences. They suffer from a hugely limited user interface (compare the two-thumbs-and-one-eye that are needed to use a games console with all the senses, muscles and brain-body systems that are deployed to climb a tree). Moreover, in real terms, the bandwidth of technological interfaces is tiny (do not be confused by talk of gigabytes and megahertz). Yes, scientists are building machines that can get around some simplified real-world environments like rooms or offices. But the amount of data that would be needed to navigate the world the way a child does is many orders of magnitude higher. I am not saying we will never see robots climbing trees. But do not hold your breath.

It is helpful to use a diet analogy when thinking about childhood experiences. For most children, what matters is not to abstain from different types of experience altogether, but to have a broad, balanced diet. We have a reasonable idea of the consequences of a highly restricted, largely digital and screen-based diet. This recent authoritative report from Public Health England [pdf link] summarises the consequences for children’s well-being of excessive screen time, drawing on a literature review and on studies that track the lives of thousands of children. Here is what it says, more-or-less in full:

Time spent playing computer games was significantly and negatively associated with young people’s wellbeing. Television viewing has been associated with teachers’ and parents’ reports of children’s attention difficulties, and with children self- reporting attention problems.

Increased screen time and exposure to media (such as bedroom TVs) is consistently associated with reduced feelings of social acceptance, and increased feelings of loneliness, conduct problems and aggression.

Increased TV viewing is associated with lower self-worth and self-esteem and lower levels of self-reported happiness. The odds of children not worrying were highest in those who watched less than an hour on weekdays. Parents were also more likely to regard their child as unhappy if they watched a very large amount of TV.

Specific types of internet activity (social networking sites, multi-player online games) have been associated with lower levels of wellbeing among children. Children who spend more time on computers, watching TV and playing video games tend to experience higher levels of emotional distress, anxiety and depression. This relationship is particularly negative among those who engage in high levels of screen use (more than four hours a day).

The evidence suggests a ‘dose-response’ relationship, where each additional hour of viewing increases children’s likelihood of experiencing socio-emotional problems and the risk of lower self-esteem.

We can debate the details of this evidence. Some of the more alarming studies are based on children in the US, not the UK, and even the UK longitudinal data does not prove cause and effect. But it is hard to argue with the overall picture: that we should be very concerned about the consequences of a diet of experience that is largely mediated by screens. (And note that this report just looked at well-being, not physical activity.) What is more, as Prof Sonia Livingstone – one of the worlds’ leading researchers on children’s digital lives – argues, the bulk of the evidence suggests that the biggest threat from a heavily technology-mediated childhood is not from the digital content itself, but from the opportunity costs: the real-world experiences that such children are missing out on, because they are spending so much time in front of screens.

Given this evidence, it might seem crystal clear that technology is the problem. But that is the wrong conclusion. Children’s growing immersion in technology is as much a symptom as a cause of their disconnect from the outdoors and the real world. The fact is that children are increasingly being reared in captivity. Society does not make it easy for them to satisfy their appetite for experience – to explore and discover what lies beyond their front doors. Across the developed world, the horizons of childhood have been shrinking for decades, for all sorts of reasons. Given children’s hunger for experience – and especially for stimulation, challenge, and social contact with friends and peers – relying on technology to feed this hunger is an understandable response.

It is also worth reminding ourselves that children themselves are clear about the role of technology in their lives. Given the choice, most would prefer to engage with the world around them first-hand, not through a screen.

One thing is for sure: our lives, and our children’s lives, are going to become ever more mediated by our use of technology. We cannot turn the cultural clock back to a time before smartphones, consoles, and tablets. And it is wrong to think that these technologies have nothing to offer. For instance, the website Mission:Explore offers hundreds of ideas for engaging real-world adventures – such as “Explore a local stream, river or lake looking for trash and animals. How many birds, mammals, fish and reptiles do you find for every piece of human waste?” And many children and young people themselves use technology in creative, exploratory ways. My teenage daughter has introduced me to the online world of fan fiction websites, where budding writers (including a large proportion of young people) use fictional characters like Dr Who and Sherlock Holmes as the springboard for their own attempts at creative writing.

To come back to my diet analogy, if children are consuming too much technology, it is because as a society, we are not doing enough to make healthier alternatives available. If we are to turn this around, we need to overcome the barriers that constrain children’s horizons. These barriers are many and varied, and I have written extensively about some of them here. They include excessive traffic-dominated streets, run-down parks and green spaces, excessive risk aversion, a narrow, impoverished view of learning, sophisticated marketing, and unwelcoming and hostile attitudes to the very presence of children out of doors.

I am not saying that parents have no role to play, or that some should not be doing more to get their children away from screens and out of doors. But simply telling children to use screens less, or telling parents to limit their kids’ screen time, without tackling these wider obstacles is a recipe for family conflict and frustration. It also dumps the whole problem entirely onto parents. This lets off the hook everyone else whose actions make it harder for parents to give their children more everyday freedoms: from grumpy neighbours to planners, educators, politicians, corporations, and the media.

Screen-mediated lives are a reflection of children’s loss of contact with the wider world. But technology is as much a symptom as a cause, and it is not the enemy.

What we most urgently need is not more lecturing. It is sustained, collective action across society to tackle the barriers that keep too many children in thrall to technology. Only then will they be able to explore the awe and wonder of the world around them, through all their senses and in full high definition 3-D.

This is an edited version of a talk I gave last Friday at the Grant Museum of Zoology, University College London, at a debate entitled ‘What Has Technology Ever Done for Nature?’

18 responses to “Is technology the enemy of an outdoor childhood?”