Think the Scandinavians have succeeded in reconnecting children with nature? Think again

Earlier this month I went to Denmark to give a speech at the Nordic Adventure conference, whose theme was reconnecting children with nature. It was not my first visit to the region. I can clearly remember that trip: a study tour in 2003 during my secondment to Whitehall to lead the first UK Government review of children’s play. Back then, I came home inspired by what I had seen – like the nature park at Valbyparken, which had just been built, and which is now one of the city’s most popular parks.

Many of the international delegates to this conference also came looking for inspiration. But this time, I had a different goal. I wanted to get behind the success stories – the beautiful spaces, the switched-on educators, the generously funded programmes – and find out whether it really is so easy for the Nordic nations to make nature a meaningful part of children’s everyday lives. I wanted to hear about the problems, the barriers and the challenges. 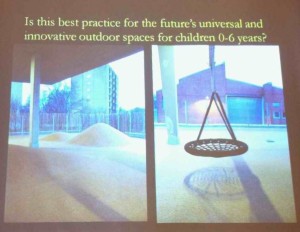 My hunch that things are not perfect in Scandinavia was swiftly confirmed by the chair of the event (and designer of Valbyparken), my friend and kindred spirit Helle Nebelong. She showed an image of the outdoor space of a Norwegian early childhood centre. She claimed that in Norway, it is seen as a beacon of good practice.

During the event I also heard of a pre-school in Copenhagen that stopped children from digging in its outdoor space, seeing little or no educational benefit in the activity. Other delegates visited one Danish secondary school where the grounds were attractively landscaped, but where several teenage girls they spoke to complained that the teachers did not give them enough opportunity to enjoy them. Experienced pedagogues in adventure playgrounds talked about the challenges in sustaining children’s interest in nature and the outdoors, in the context of their ever-expanding online lives. And we heard of a wider shift in educational philosophy in Denmark and Sweden towards what leading Finnish educational thinker Pasi Sahlberg calls the global education reform movement (or GERM for short): curriculum standardisation, an emphasis on core subjects, and high-stakes testing.

Of course, this is not the full picture. There was plenty of evidence of the value Scandinavians place on children’s outdoor experiences. I was struck by the fact that not one but two Danish ministers gave speeches at the opening session of the conference. What is more, Environment Minister Ida Auken spoke eloquently and convincingly on the topic, declaring “when you see nature as a big playground you see an infinity of possibilities.” (Though by contrast, one Swedish delegate told me that if the event had been organised in her country, she doubted that a single minister would have attended.)

We heard hard facts about the degree of political support for children’s outdoor play and learning. For example, Copenhagen’s 23 staffed public playgrounds – the focus of a previous post of mine – have not only survived the economic downturn, but are also set to be joined by three new ones in the coming years, according to an official from the City Council. The Council has just decided to invest DKK 8 million (£1 million; $1.4 million) in improvements to school and pre-school grounds in this financial year (last year, the budget was zero).

We also heard about Norway’s long tradition of outdoor nature preschools. Academic Olav B. Lysklett of Queen Maud University College in Trondheim cited a 1961 government report that recommended that “not more than 2 hours a day should be spent indoors.” Current guidance is less prescriptive! But support for outdoor-based settings remains strong, and there are clear incentives to encourage their creation. For example, the government’s building standards for nature preschools are more relaxed than for conventional ones, meaning that it is cheaper and faster to set them up. Somewhere between 5 and 10 per cent of Norwegian preschoolers attend nature preschools (defined as settings with a focus on outdoor learning, where nature is a fundamental pedagogic principle). I suspect few countries can compete with this – though some delegates were surprised the figure was this low.

‘Friluftsliv’ – the Nordic ‘fresh air life’ culture of valuing the outdoors – also shone through in many of the places we visited during the conference. My personal highlights included Rødovre construction playground, an after-school haven for hundreds of children (and their 186 rabbits, plus chickens, birds, horses, goats and pigs) tucked away in a Copenhagen suburb. 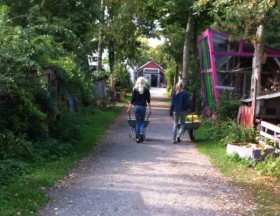 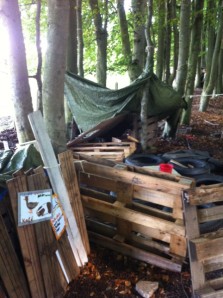 I had seen Rødovre on a previous trip. But another highlight – Skabersjöskolan, a primary school in the countryside outside Malmö, just across the Øresund Bridge in Sweden – was new to me. Here, around half of the children’s curriculum time is spent outside (in varied outdoor spaces that included den-building areas, a fire pit and a forest garden) and they begin every school day with an outdoor lesson.

Given my earlier comments, you might question the value of visiting Scandinavian services and outdoor spaces. But that would be too hasty. First of all, who could fail to be inspired by seeing a dreamlike tower in a public park, or a mythic boat sailing across reclaimed marshland (part of land artist Alfio Bonanno’s Himmelhøj installation)? 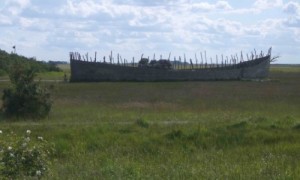 Second – and perhaps more valuable – is the opportunity to share practice, research, and tactics, and to gain mutual support. More than ever, those of us around the world who are calling for a rethink in the way children live and learn are up against the same pressures:  safety fears (and even more insidious, fear of being blamed if a child gets hurt or upset), busy and at times anxious parents, threats to green spaces within and beyond schools and other settings, the growing attractions of the media and the virtual world, and competing political priorities. Helle Nebelong neatly summarised these challenges in talking of the ‘triangle trap’ of institutions – home, school and out-of-school services – that circumscribe too many children’s lives.

So should you come to Denmark, Sweden or Norway if you get the chance? Of course you should. But do not think the Nordic nations have all the answers. The truth is, they are fighting the same battles as the rest of us.

28 responses to “Think the Scandinavians have succeeded in reconnecting children with nature? Think again”