Exploring some of London’s most playful spaces and places

We only had ten or twelve people take part over the two days, but I’m still buzzing after last weekend’s Open House play space tours. Why?

Simple: I saw some inspirational work, and had some immensely rewarding conversations.

On Saturday Liz Kessler led a walking tour around the EC1 New Deal for Communities (NDC) area. NDC was an ambitious Government-funded programme that aimed to improve the lives of people living in 39 of England’s most disadvantaged neighbourhoods through long-term, holistic initiatives. The award-winning EC1 NDC public realm improvement programme, led by Liz, had a £6 million budget over six years (a small fraction of the total of £50 million), and the aim of getting local people of all ages to use, enjoy and value their streets and public spaces. This progressive goal is all the more admirable given the statistic that 94 per cent of residents in the area live in social housing (though a minority are owner-occupiers) and the vast majority have no access to gardens or other private outdoor space. (A 30-minute audio presentation by her on the programme is available here, and a case study report is here.) 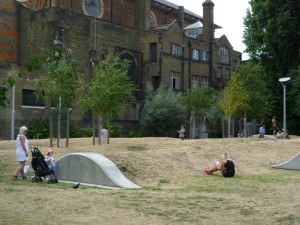 We started at Spa Fields, the area’s biggest green space. The refurbishment was designed by Phil Heaton, and includes a playful, elegant yet functional park, and a popular, distinctive play space. We took a meandering and surprisingly green route across most of the NDC area to Radnor Street Gardens. This is one of London’s best examples of a ‘playable space’ – in other words, a space where offering opportunities for play is only one of the jobs that has to be done. My work for the GLA helped to embed this idea in London’s planning system. In my view, it is fundamental to the success of public play facilities in almost any urban area. 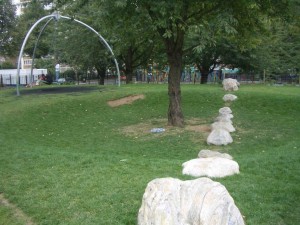 Liz gave us a masterclass in how a clear, positive vision and a coherent, comprehensive, engaged approach can transform the feel of even the most challenging of neighbourhoods. What struck me was how the programme combined park, amenity space and play projects, along with streetscape and highways initiatives, so that the whole far exceeded the sum of its parts. The ingredients we saw included [*deep breath*]: new play spaces and toilet blocks in parks and estates, new public squares from reclaimed street space and car parks, ‘home zone’-style shared road surfaces, landscaped road closures, greening up an adventure playground, estate-based allotment projects, cycle lanes, shared use ball game areas, pushchair-friendly pavements, even (on one estate) new refuse bin sheds with green roofs. Her approach to engagement was revealing. Local people were closely involved at all levels, right up to the NDC board. However, they were seen not simply as ‘stakeholders’ or ‘consumers’, but as people who needed to be inspired, debated with, and (hopefully) won over.

On Sunday we visited two of Camden’s Play Pathfinder sites: Waterlow Park and the Whittington Estate. With us were Nicola Butler (co-author of Design for Play – the UK’s play design bible – and Director of Hackney Play Association), Mark Lemanski (from muf architecture/art, who designed the Whittington site) and Simon Wooden, whose company Developing Projects project-managed the whole Camden Play Pathfinder programme (including the adventure playground, which I’ll come to). I have a vested interest in this programme; Camden brought me in to help them with their vision and strategy, and I was also on the jury that selected all the designers.

Each of these two play spaces has a fascinating story to tell. The one at Waterlow nestles in a central, yet previously underused part of the park. The design, by Land Use Consultants is thoughtful and understated, combining carefully chosen equipment, planting (including fruit trees and bushes), pathways and wooden art sculptures to create a playful oasis in the heart of the parkland.

That Waterlow is a hit was evident from the moment we arrived. There must have been at least 25 children and 15 adults enjoying the space. There was even a portable coffee stand waiting to open nearby – a sure sign of increased patronage. It was clear to me that its location was critical to this success. Yet Simon told us that the choice of site was controversial. The influential and vocal ‘Friends of Waterlow Park’ group had been opposed to it, preferring a more marginal location. Simon explained that Camden Council ran its own thorough consultation, including a survey of hundreds of local residents. This showed strong support for the chosen site, so it was given the go-ahead (with some changes to the design to address the group’s concerns).

The Whittington play space – just a ten minute walk away – is very different. It is not a destination facility, but rather a place for the mixed resident population of this small, architecturally noteworthy, low-rise modernist housing estate. (Coincidentally, this web link includes a ‘before’ photo of the space. Mark informed us that this space used to be inaccessible to residents, as it was kept locked.)

The muf team aimed to make play a natural extension of the buildings, and the buildings a natural backdrop to the play, through echoing the estate’s fabric in its design and choice of materials. The stonework and fountain make subtle reference to the concrete construction of the blocks and the nearby cemetery. A bespoke tree-stump, rope and metal climbing structure uses the same metal tubing found elsewhere on the estate to offer children the chance to climb to the level of the mature trees in the space.

This ambitious, architecturally literate scheme is not without its critics. Some locals felt there simply wasn’t enough for children to play on – and indeed an extra piece of equipment has subsequently been added in response. I have some sympathy with this criticism. But I also feel muf was right to aim for a space that paid due respect to the significance of the architecture of its surroundings. As Simon pointed out, Camden had high aspirations for its play programme and that meant taking some risks.

Huge thanks to Liz, Nicola, Simon and Mark for agreeing to join me, and thanks to the other participants too, for helping to make the walks so enjoyable.