The child as an indicator species for cities: reflections on Philadelphia

This post starts by sharing an op-ed piece of mine published in the Philadelphia Enquirer last week to coincide with my trip to the city. It is followed by a postscript with reflections on the visit. I’ve also inserted images of some of the parks I saw. 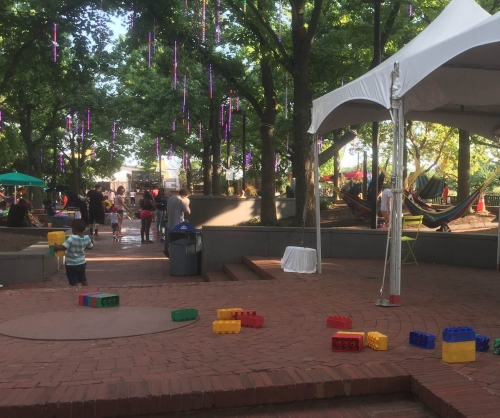 Imagine you take a time machine trip to 2037. You step out and start to explore your city. What sights and sounds would convince you that the Philly of the future was thriving?

Here’s what I would check for: children. Children playing outside. Children exploring on foot, by bicycle and public transit, getting to know and enjoy their streets, their parks, their local area and the wider city. Children spreading their wings and taking those gradual steps to becoming active, engaged, responsible citizens. Learning all the time from their own efforts, and their own mistakes. Like we all did when we were young.

By this measure, American cities today are anything but thriving. Children’s everyday freedoms – whether it’s walking home from school with friends, or heading out to the corner store for a slushy – have been in decline for decades.

It is parents who make the judgement calls about when to grant these freedoms. So it is tempting to put all the blame on parents for the shrinking of children’s horizons.

Tempting, but wrong. When parents today look out from their front doors, they see a world that is at best uncaring about their children, and at worst hostile to them. And no wonder, thanks to relentless traffic growth, run-down parks and green spaces, and eyeball-grabbing scaremongering in both the mainstream and social media (even though violent crime in America has plummeted since the 1990s).

It doesn’t have to be this way. In my work as an advocate for more child-friendly urban planning, I have been to many cities where things are very different. In Tokyo, six-year-olds ride the subway downtown to school alongside the suited businessmen and women. In Switzerland, parents who do not let their kids travel to kindergarten – yes, kindergarten – on their own are looked down on.

Or take Bogotá, the once failing capital city of Colombia. Over two decades city leaders – most prominently Enrique Peñalosa, re-elected last year – have reversed the city’s decline. Hundreds of miles of streets and sidewalks were reclaimed for pedestrians. Elegant new parks gave the city green lungs. The Transmilenio – the world’s biggest urban busway scheme – and an ever-expanding network of cycleways offered millions of people safe, reliable, affordable alternatives to the car. And the touchstone and compass point of this remarkable reinvention has been child-friendly urban planning. If Bogotá can do it, any city can.

Who pays when today’s inactive children grow up to be tomorrow’s unhealthy adults? Anyone who pays tax or health insurance – in other words, all of us.

Who loses when cities are so car-dominated that parents feel they have no option but to get in their cars too? Not just commuters, but anyone who cares about pollution.

What happens when families who have the option move out of the city and into the suburbs? They take their tax and spending with them, and the city’s economy starts to crumble.

In Rotterdam in the 1990s, family flight was undermining the city’s future. So city leaders have spent tens of millions of dollars making inner urban neighbourhoods cleaner, safer and greener. They are now reaping the rewards of what they unapologetically call state-sponsored gentrification.

So when on Wednesday evening I share my vision of the future for cities at the Trinity Center for Urban Life, my message will be simple. If we ask ourselves what the sustainable, successful, healthy city of the future looks like, the answer is that it looks like a child-friendly city. 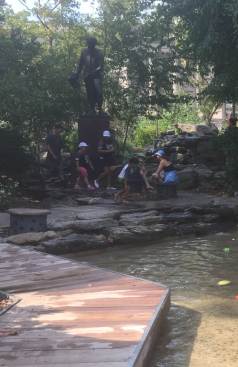 Even on such a short visit I could see that Philadelphia is on the up for many. More jobs and people (including families) are moving downtown, and I was proudly shown revamped public spaces like Sister Cities and Dilworth Parks (two schemes funded by the Center City District public-private partnership). However, these changes are creating tensions, with questions being asked about gentrification, equity and the prospects for low-income communities.

Equity concerns were central to the discussion after my lunchtime talk at Smith Playground, which several leading elected politicians attended. With many playgrounds in poor neighbourhoods becoming what Philly’s Parks Commissioner Kathryn Ott Lovell (at the evening session) called ‘swing graveyards’, it is no wonder that many are unhappy at all the money being spent downtown while local spaces are neglected.

This is a familiar urban policy scenario, but one made more acute by the city’s unenviable status as the USA’s poorest big city, according to the Enquirer. 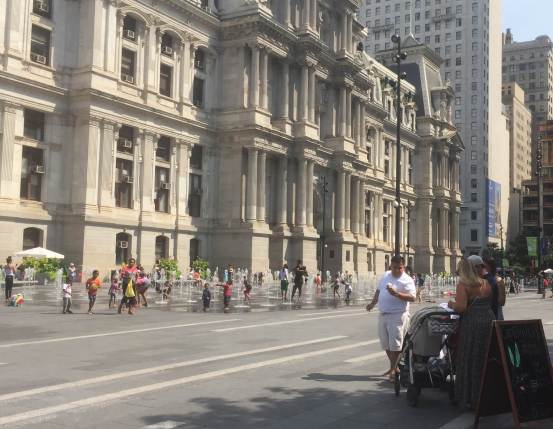 All of which creates both opportunities and challenges for the city. Central to the future of Philly’s public spaces is Rebuild, a once-in-a-generation $500 million revamp of its parks, playgrounds, recreation centres and libraries.

Time will tell if my brief visit has helped to influence this programme, and to win Philadelphians over to the idea of seeing their city through children’s eyes. I would love to return to find out, and to build the conversation around child-friendly urban planning. I remain convinced that a city can only truly say it is succeeding if children – all children, not just the affluent – are active, visible and engaged users of its parks, playgrounds, streets and civic spaces.

3 responses to “The child as an indicator species for cities: reflections on Philadelphia”