The R word: risk, uncertainty and the possibility of adverse outcomes in play

Let’s say that, like me, you are signed up to the idea that we’ve become too overprotective and anxious about children in their play. What language should we use to make the case for a better approach? In particular, does the word ‘risk’ – for instance, in the term ‘risky play’ – help or not?

UK play advocate Adrian Voce – my successor at what became Play England – has questioned the use of the term ‘risk’. While recognising the progress that has been made on the place of risk in play, he says:

Although ‘risky’ and ‘adventurous’ are, in a sense, synonymous, the latter word has an unarguably more positive meaning. It also captures much better the essence of children at play – wanting to push the boundaries, test their limits and, sure, take some risks – but in the pursuit of fun and excitement, not the reckless endangerment that the term ‘risky play’ can evoke… ‘Risky’ cannot be the most appropriate word to describe the opportunities and environments we want to provide for them, or the practice we adopt in doing so.

His concerns are echoed by American teacher and blogger Kim Allsop, who said in a recent post “please, can we stop talking about risk? Instead, let’s talk about adventure, preparation and trust.”

I hope we would all agree that we need a more balanced, thoughtful approach to the unpredictability that is such a central part of children’s play. We need to recognise the value of a degree of freedom, choice and autonomy. And we want to get well away from where we were in the 1990s, when the word ‘play’ had the word ‘safe’ inserted before it by default.

We need to accept that when children play freely, the outcomes are uncertain. In other words, we need to accept real risk. Of course, this does not mean accepting recklessness – but no-one is saying it does. 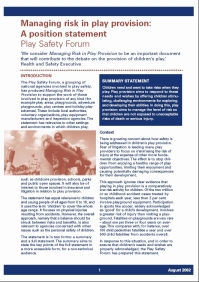 The acceptance of risk is not just a detail: it is the single most important step that we are asking the anxious to take. Using the word ‘risk’ is of value precisely because it faces head-on the possibility of adverse outcomes. (Back in 2002, the milestone Managing Risk in Play Provision position statement strikingly stated “it may on occasions be unavoidable that play provision exposes children to the risk – the very low risk – of serious injury or even death.”)

Avoiding the word ‘risky’ and instead using ‘adventurous’ or ‘challenging’ is having our cake of uncertainty and eating it. The implied message is ‘your child will have adventures – but don’t worry, nothing will go wrong.’

There are lessons from the knots that ‘adventure activity’ folk have tied themselves into for decades over risk and safety (as Simon Beames argues in his recent book Adventurous learning: A pedagogy for a changing world). A similar fate befell many British adventure playgrounds through the 1980s and 1990s. The adoption of the word ‘adventure’ did not appear to insulate them from the rise of excessive risk aversion.

That said, I do have reservations about the term ‘risky play’. I recall first coming across it when reviewing Helen Tovey’s 2007 book Playing Outdoors: Spaces and Places, Risk and Challenge. As I said at the time, it conjures up unhelpful notions of ‘doses’ of ‘risky play’ as a kind of antidote and add-on to overprotective, intrusive supervision the rest of the time. But I would hope that thoughtful practitioners would be alive to that danger.

As for the views of parents, the press or the public, I am wary of speculating. I do have one (admittedly unscientific) piece of evidence that these audiences may not find the R word as off-putting as some seem to think. It comes from this news article. After reading it, 98% of those who voted in effect voted ‘yes’ to elements of risk in playgrounds. 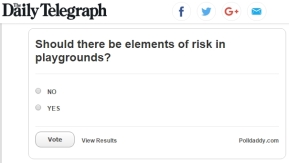 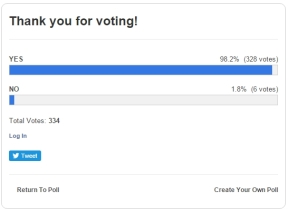 Even if in some contexts, the R word is a step too far for some – and it clearly is – language changes, and the meaning of words evolves. And sometimes, that happens precisely through choosing words that question and confront existing values. Just look at how the LGBT community has reclaimed the word ‘queer’.

The Norwegian early years academic Ellen Sandseter is closely associated with promoting ‘risky play’ and has worked up a research definition of the phrase. Her contribution to this debate parallels my views on the merits of ‘risk’ as against ‘adventure’ or ‘challenge’.

She also makes the sound point that context and culture are important, and reasons to be wary of general statements about language. I wonder, for instance, whether the USA might be one place where the R word is a hard sell.

Having said that, let us look globally at play advocacy over the last decade or so. While there are not many causes for celebration, one of them is surely around risk.

This global progress has been underpinned by clear messages about what freedom, choice and uncertainty mean in children’s play. They mean risk. 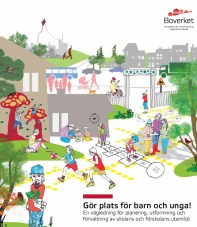 I came across two examples in recent months. The first is from Sweden, and the Government guidance for a £50 million investment programme in school playgrounds. Its first substantive section is headed “necessary risk-taking.” It states: “Open spaces for children and young people should be planned and designed to promote children’s opportunity to seek excitement in their play, even where this may involve some risk taking” (according to Google Translate). The second is from the Netherlands, where Dutch play advocates are meeting next week to discuss ‘risk and resilience’.

My own work on risk with parents, educators, playworkers and decision-makers over the years has taken me across the UK and to mainland Europe, North America, Japan and Australasia. The impact of this work is for others to judge. But what I can say is that clarity about risk – that it means real uncertainty of outcome – has been a central and indispensable theme.

For proof of this, take a look at the tag cloud on the right hand side of your screen.

15 responses to “The R word: risk, uncertainty and the possibility of adverse outcomes in play”