The Chinese educational revolution with outdoor play as its beating heart

Anji Play – a public kindergarten service running in 140 centres for 14,000 children aged 3-6 in Anji County, China  – is gaining an international profile for its emphasis on outdoor play and its relaxed approach to risk. I first stumbled on it a couple of years ago, thanks to this widely-shared video on Facebook. More recently my curiosity was piqued by its inclusion in a superb episode of the Netflix TV documentary ‘Abstract’, on the US construction toy designer and play advocate Cas Holman.

Then I realised that an upcoming trip to China was going to take me literally to Anji Play’s doorstep. So I persuaded my Chinese clients to exploit this lucky coincidence and set up a visit.

My first view of the schoolyard at Anji Play

This post shares some thoughts on what I saw and heard. It ends with a short interview with Anji Play’s founder, Cheng Xueqin, who has just stepped down from her role as head of service.

The setting we visited, in downtown Anji and surrounded by low-rise apartment blocks, had 550 – yes, 550 – children on roll and 100 staff (most educated to degree level, I was told). When we arrived at around 10 am, the 2-hour morning outdoor play session was in full swing.

The immediate impression was not unlike a building site populated by dozens of teams of small uniformed workers, as this short video walk-through shows.

This impression was amplified by the presence of a gutted white Transit van. I had to smile; these vans – popular amongst builders and tradespeople – are cultural icons of a sort in the UK. 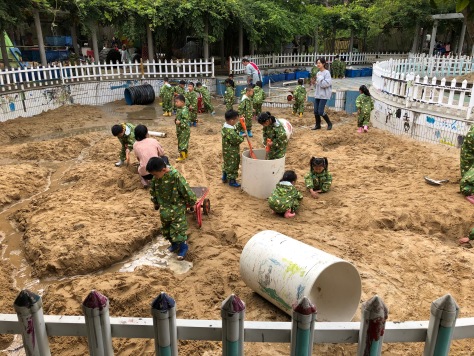 One group was using part of the white school building wall as a blank canvas for painting.

Another group – in the most overtly risky activity – was playing with a large plastic drum. One child got inside it and rolled down a slope, while others helped and/or watched (and still others slid down beside them on plastic toboggans).

The children clearly had a lot of freedom to direct their play. I wondered if the children were playing in class groups, and if they were expected to stay in these groups (I did not have the chance to check this). If so, the sessions may not be quite what UK educators would call free flow play. In any case, almost all the children were highly engaged and active. The whole place had an appealing, bubbling ambience: lively, yet not boiling over.

Direct adult intervention was extremely rare, even on the rare occasions when a child fell over, or argued with another child. Educators were clearly holding back, many using smartphones to record what was going on (which did not seem to trouble the children).

When I asked a colleague of Ms Cheng to summarise Anji’s approach to outdoor play, she told me: “educators are observers and don’t get involved unless there’s something extremely dangerous. They look out for highlights from the children every day, and ask the children at the end of the day. We have a discussion about what they have done and learnt. Not just conversation, but also drawings, and how they feel.”

In an echo of an approach I came across a few years ago in Bold Park Community School in Australia, I was told: “younger ones will work in smaller groups from a young age, so they learn to work with each other. If arguments happen, the educator’s role is to let them have an argument and solve the problems by themselves, and help them to reflect on what’s happened.”

When I asked the educator about safety fears, she said: “all parents agree with our philosophy, and understand about risk and the need to learn. They don’t blame teachers if there’s a slight accident.” She added that in the last few years accidents had been going down.

We also spent some time in the reception (so often a revealing area in settings). On the main staircase, statements of the five core principles of Anji Play – love, risk, joy, engagement and reflection – were prominently on display, and made compelling reading. (For more on the backstory of Anji Play, with some fascinating insights into its history, check out this article by Jesse Coffino, a US Anji Play enthusiast and advocate.) 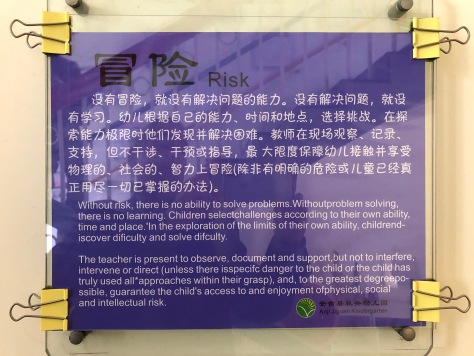 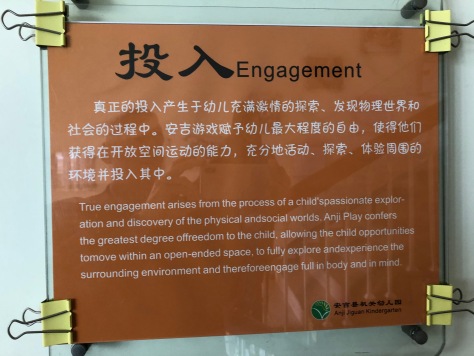 Schoolyard photos gave a pictorial history of the evolution of the outdoor space, while photos of international visits spoke of the high profile of the service.

After all the children had left the schoolyard, we attended a reflection session in a large room with a stage and lecture theatre-style seating. There, we watched as a group of children on the stage discussed their play experiences with their educator, drawing on some short video clips of them playing. This discussion was in turn videoed by other staff – presumably for further reflection later.

The educator led an open enquiry into one aspect of the earlier play activity: namely whether and why the drum rolled further when a child was inside than when it was empty. She responded positively and non-judgementally to all the children’s comments. She encouraged them to offer theories, and to question and argue with each other (significant, because Chinese children are typically not encouraged to debate). She seemed happy to allow side conversations and even low-level play (what some might call fidgeting); I noticed two children doing some sly play-fighting towards the end of the session.

My overwhelming impression was of a learning programme in which extended, open-ended, at times adventurous outdoor play is absolutely central. These experiences provide the raw materials for adult-facilitated (but still child-centred) class-based learning, in which technology plays a key role.

The programme is not entirely devoted to play. And I wondered how the post-play reflection sessions might, over time, shape the children’s play choices and narratives. But there is no denying that extended opportunities for immersive, self-directed, self-motivated play (what Anji Play calls ‘true play’) are the beating heart of the programme.

Coincidentally, my visit to China also introduced me to Hans Becker, until a few years ago CEO of Humanitas, a large Dutch chain of residential homes for older people. At the conference where I was also speaking, he told how he had transformed the experiences of his residents by adopting what he called a ‘Yes culture’, founded on the principle that what makes people happiest is to be “the boss of their own lives.”

In an uncanny echo of debates about the overprotection of children, Becker repeatedly stated “too much care is worse than too little care,” because it undermines people’s autonomy and choice, reducing their ability to self-care.

What struck me is that Anji Play and Humanitas, while focusing on opposite ends of the life course, have a powerful shared, humanistic vision of everyday autonomy: that no matter what our stage in life, we place a high value on being able to influence our own destinies. In a sense, we all want to be the bosses of our own lives.

In my interview, Ms Cheng describes her approach as ‘a revolution’ and celebrates how her children went on to be independent thinkers. I could not help but be reminded of the origins of Reggio Emilia’s acclaimed early childhood service, founded in part as a post-war reaction to the spread of fascism in Italy. The visit reinforced my view that, in an age of growing anxiety, uncertainty and authoritarianism, giving children a real taste of freedom and independence through play is not only transformational in educational terms; it is also a profoundly moral stance.

Q: Can you summarise your approach at Anji Play?
Children learn themselves through exploring and through play. We design the whole environment – including the physical environment and also the encouragement from the educators – to just encourage children to play and lead themselves.

Q: This is not my image of a Chinese educational setting.
Anji Play is a revolution.

Q: Where is your inspiration? Where did you get your philosophy from? From your childhood? From parents? From academics?
From my childhood.

Q: Tell me a little bit more about your childhood.
When I was little my parents just let me play, and so my playground was 7 km around me. This arm was dislocated once, this one twice [from injuries]. I very much understand the significance of adventure.

Q: So we must give children the freedom to learn from their mistakes?
The children have to exceed their boundaries. From the known to the unknown.

Q: What do parents think about your approach?
When we convince parents of the significance of play here, they support it. They can see that the children are happily playing here, and also we can explain the value of play.

Q: When your children go to elementary school and then to high school, how do they do?
They are more active and independent in their thinking.

Q: Can that be a problem in some schools: that they are seen as too independent?
It may be a problem for the educators, but not the kids.

Q: I want to ask about your educators here. Is it hard for you to find educators who will put your approach into practice?
It is not difficult. We have more and more staff joining. We are even working in big cities and they come here. The educators are happy here, because of the satisfaction of working in this way. The educators enjoy that they can discover children and what they can do.

Acknowledgements
Many thanks to Dr Yingying Tian and Chia-Yun Wu of China Design Centre for interpreting, and for arranging the visit in partnership with my other clients, the development companies Bluetown and Greentown. And of course, thanks also to Ms Cheng and her colleagues at Anji Play for hosting us, and for agreeing to the visit (which was arranged at short notice).