Returning to the Antipodes

I am heading back to Australia and New Zealand in around three weeks, and am pleased to share some reflections, along with my schedule.

My trip takes in a flying visit to Auckland, followed by a week in Adelaide, before finishing with another week in Queensland. I will be joined in QLD by David Bond (kindred spirit, documentary film-maker, star of Project Wild Thing and self-appointed Marketing Director of Nature). A full itinerary is at the end of this post.

Australia has been a regular calling point of mine for nearly a decade now. As I argued in a post from 2011, the sprawling nature of its cities is a major barrier to children’s everyday freedoms.

That said, some of the most ambitious and forward-thinking work I hear about is happening in this part of the world. What is more, Aussies are quite prepared to take the best ideas from elsewhere and adapt them to their own circumstances.

Two of my Australian clients are the sister agencies Nature Play SA and Nature Play QLD. Both, like their elder sibling Nature Play WA (who I worked with in 2012) are dedicated to reconnecting children with nature and the outdoors, while embracing the power and potential of play.

My other client in Adelaide is OPAL SA, whose community-based model for tackling obesity comes from France. In Campbelltown, a suburb of the city, the OPAL project has been energetically promoting the Playing Out model of resident-led road closures for play.

Campbelltown Council is also an early adopter of risk benefit assessment (RBA) in play provision, which it formally adopted as policy last year [pdf link: see section 7.4.3]. The state-wide OPAL initiative is now promoting the approach at its event, where I will be speaking alongside play designer Liz Cummins. 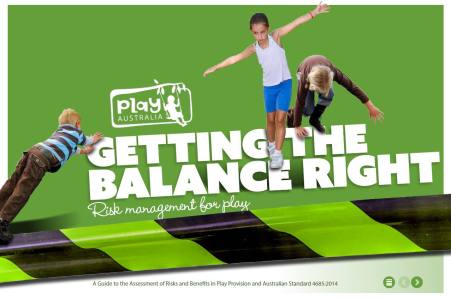 Liz is the author of Getting the Balance Right: Risk Management for Play. Published by Play Australia and launched just last November, this guide draws on – and references – Managing Risk in Play Provision: Implementation Guide alongside other work by me and my co-authors David Ball and Bernard Spiegal. On a personal note, it is hugely gratifying to see how our work on RBA is spreading across the globe.

New Zealand – my other port of call – is comparatively unfamiliar to me, having only visited once in 2008. It shares with Australia a love of the car and hence a similar, sprawling pattern of housing.

But there are important differences. Most obvious to me is a more visibly pro-risk culture. I recall seeing a workshop on pyrography at one childcare conference I attended. More broadly, it is hard to accuse Kiwis of living in a ‘helicopter society’ when many of its children walk around the streets barefoot – as I saw for myself.

NZ friends assure me this is a) still quite common and b) definitively a matter of choice and custom, not of poverty or neglect.

Nonetheless designers, educators and activists in New Zealand also tell me that they are facing growing pressures to take a more risk averse approach. This is not surprising: the country is going through many of the same long-term social changes that have led children around the world to spend ever more time indoors and in front of screens.

So I am particularly looking forward to returning to New Zealand. I hope I can help to make the case for a balanced and thoughtful take on childhood risk, before the country goes too far down the false trail of the bubble-wrapped childhood that has been so problematic in the US, UK and Australia.

[And a quick plug to any Kiwis reading this: I may be returning to your country this November/December. Do get in touch if you see any opportunities for us to work together around then.]

Along the way I will be sharing platforms with many innovative and exciting initiatives and settings who are working in different ways to expand children’s horizons. This is a massive challenge, as I noted a couple of weeks ago. But it is one I am happy to support on this latest trip down under.

It’s a packed schedule (apart from a week to myself in New Zealand) so there is no scope for any additional engagements. But if you are in the neighbourhood at any time and fancy a chat, do get in touch and we will see what we can do.