An open letter to ASTM, and to anyone who wants to see a thoughtful approach to playground safety

The American standards body ASTM International is planning a major change to playground safety standards. [Update 5 March 2015: this change was put on hold on 4 March – but what happens next is unclear. See this post for more details.]

This post (including a joint open letter to ASTM from Robin Sutcliffe – chairman of the UK Play Safety Forum – and me) is a direct plea to put this proposal on hold pending a wider review. The proposal – to tighten up the impact absorbency thresholds for playground surfacing – may sound purely technical. In fact, it is far more profound, as my regular collaborator Bernard Spiegal has argued. What is more, it could have far-reaching consequences, potentially leading to hundreds of millions of dollars of additional expenditure by schools, municipalities and others, the removal of equipment, and widespread playground closures. Its effects could be felt far beyond the USA, given the global push to normalize product safety standards.

Despite its implications, the proposal has so far had almost no debate beyond ASTM. This post, and the open letter below, aim to persuade ASTM to think again, and to open up this important topic to anyone who wants to see a more thoughtful approach to playground safety. 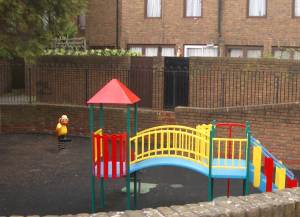 Of course no-one argues that playgrounds should be dangerous. But balancing safety against other goals is a complex challenge. When it comes to playground safety, the evidence and arguments pull in different ways, and demand careful consideration. (This position been set out by me many times: in my book No Fear, on this website, and in a joint open access academic paper on playground standards by David Ball, Harry Harbottle, Bernard Spiegal and me.)

For this reason Robin Sutcliffe wrote to ASTM in December 2014 on behalf of the Play Safety Forum. The letter asked ASTM not to scrap the proposal altogether, but to put its plans on hold, and to carry out a comprehensive, transparent review with input from a wide range of viewpoints.

ASTM has so far ignored the Play Safety Forum’s call for a review. Meanwhile, concern continues to grow. The call has been endorsed by BSI, ASTM’s sister organisation here in the UK. It has also been echoed by Jay Beckwith, a leading American playground expert with experience on ASTM’s playground safety committees.

All is not lost: the standard has yet to be published, and there is a brief window of opportunity prior to an ASTM appeal hearing on 4 March 2015. Hence Robin and I have written another letter to ASTM (I am an adviser to the Forum). This time we are sharing it publicly, to open up the debate and encourage those who agree with us to take up the issue.

Our letter follows, in full [and there’s a pdf download here]. I would welcome comments, as ever. If you share our concerns, I would also urge you to spread the word now, and to consider getting in touch with ASTM before 4 March. If enough people make a reasoned case, I am sure that the organisation will accept the strength of the arguments.

ASTM proposal to reduce the HIC threshold for playground surfacing

This letter asks you to put on hold the publication of this standard, pending a wider review. It follows our December 2014 letter. We understand that your committees have approved publication, but that this decision has been appealed to ASTM’s Committee on Standards for consideration on 4 March 2015, giving a window of opportunity. While we understand that this Committee normally only examines procedural questions and not substantive issues, we also gather that, as chairmen of the relevant committees, you have the power to delay publication.

As you know, our view is that this is a complex topic, which demands proper consideration of evidence and arguments from a variety of perspectives and disciplines. Any decision by ASTM to reduce the Head Injury Criterion (HIC) threshold for playground surfacing would have major implications for playground providers and manufacturers not just in the USA but around the world. Hence we think it should not be taken before a broad, transparent review is carried out, involving a wide range of stakeholders.

Concern about ASTM’s current position is growing. Since writing our original letter, we have been in touch with members of your committees who share some of our concerns, and who agree with us that a more in-depth review of the topic is needed. We are also aware of wider concern beyond your committees, in the USA and beyond. Indeed as you may know our earlier letter has been endorsed by BSI, your sister organisation here in the UK. This makes us more certain of the need for a pause in the ASTM process, and a wider review.

It goes without saying that every life-changing injury or fatality is a tragedy. Moreover, concern appears to be growing about traumatic brain injury and its consequences, which can be severe or fatal. However, statistics on accidents suggest that playgrounds are comparatively safe places for children, and that traumatic head injuries from playground falls are comparatively rare events.

Accident figures from CDC suggest that in the decade 1990-2000, there was on average a single child fatality each year as a result of falls in American public playgrounds. By contrast, almost 1100 child vehicle passengers under 15 died in a single year, and almost 300 child pedestrians (US Dept of Transportation figures for 2012). Looking at recreational contexts, around 700 children under 14 drown each year (CDC). And there are on average 12 fatalities per year amongst high school and college American football players (Am J Sports Medicine).

Studies also show that playground accidents rarely result in permanent brain injury. A 2004 World Health Organisation review [pdf link] quotes two relevant studies: one states that 1.7% of school playground equipment-related injuries were concussions, and another suggests that fewer than 1% of injuries in US daycare centres were concussions from playground falls. Moreover, concussions do not always have long-term health consequences.

These figures raise serious questions about whether, given the overall goal of tackling child injuries, scarce taxpayer dollars are best spent on resurfacing playgrounds. There are many causes of child accidents and injury, and many possible responses to them. Policies that drive up spending in one area will leave less funding for others. Ignoring this reality – difficult though it may be – is not a sound basis for making decisions or setting priorities.

We accept that there is evidence from biomechanical and laboratory studies that, in the event of a direct head impact on a surface, a lower HIC value makes a traumatic brain injury less likely. But there are many other issues and questions that need to be addressed before a reduction in HIC threshold can be properly justified. Here are some:

We are not expecting ASTM or your committees to have all the answers to questions like these. But we do ask you to recognise their importance and relevance, and hence the need for a wider review.

Moreover, in calling for such a review, we are not questioning the technical expertise of your committees. Neither do we doubt that you and your colleagues share our goal of giving children exciting, engaging play experiences while protecting them from unacceptable risk. The truth is that behind this goal lies a complex and difficult balancing act. Only a wide-ranging, transparent review will ensure that we get this balance right for children and families in America and beyond.

We are copying this letter to a number of people with an interest in the topic, and also publishing it online, in order to open up the debate.

We look forward to hearing from you,

23 responses to “An open letter to ASTM, and to anyone who wants to see a thoughtful approach to playground safety”