I was in Bilbao a few weekends ago and spent several evenings in Plaza Nueva, a square in the old town and a popular weekend meeting place for local people. While grown-ups enjoyed drinks and tapas (or to use the Basque term, pintxos) in bars under the elegant colonnades, the central area was humming with children playing. Ball games, scooter races, chalk-picture-drawing, heely tricks (remember Heelys?) and chit-chat were just some of what was in the mix. 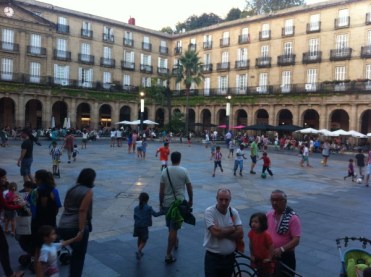 Early on in the evening (in Spanish terms, that is: up till about 10 pm) most of the children out playing were aged between 4 and 10. The level of high-energy play – impromptu football matches, fast scooter rides and chase games – was striking. At times, footballs flew over the ironwork and hit a table, or a scooting child zoomed down a slope and weaved past a pedestrian. These potential irritations were almost always greeted with a smile, if not simply ignored. I did not see a single argument, far less a security guard, the whole weekend.

But the affordances of the space were not only of interest to younger children. Around 10 pm, a group of teenagers came into the central area, stood in a circle and started playing a chase game. Others of a similar age sat watching the proceedings. 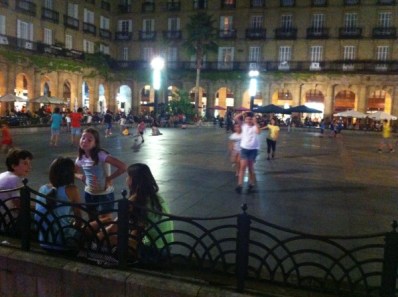 The presence of adults, far from being a deterrent, was in fact crucial to unlocking the space’s play potential. This was dramatically shown when I passed through on Sunday night. All the bars were shut, and the square was completely deserted – even though there was no obvious reason why children could not have come to play unaccompanied.

Of course, anyone who has enjoyed spending time in the sun-baked squares and piazzas of Southern European towns and cities will know the diversity of play, social contact and conviviality that they foster. But what unfolded in Plaza Nueva was as powerful an act of collective generosity towards children as I have seen: all the more so for seeming so effortless.

The spectacle impelled me to ask: why here? And to also to ask: why not back home? I could not recall seeing anything remotely similar happening anywhere in the UK.

It was plain that the location, architectural qualities and business uses of Plaza Nueva – the happy combination of place, design and function – were crucial to its success in nurturing playful and sociable dispositions.

Some details about the physical space – the smoothness of the paving, the height and coverage of the seating and ironwork surrounding the central area, the empty space left between this barrier and the bar tables – made it work particularly well in ‘holding’ children’s more vigorous activities.

The way that commercial activities impinged on the space was telling. The ground floor was all retail, and there was no shortage of customers for the bars and shops. But you did not have to be a customer to come into the square, nor to linger there. There was free seating enough for all (as long as you were happy to look out for passing balls and children). Would any new public space in London, Manchester or Birmingham allow for such apparently uneconomic activity?

Weather and climate are doubtless relevant (although the Southern part of England at least is no stranger to warm, dry, sunny evenings). It is also tempting to speculate on the divergent cultural attitudes on display – on how much more child-friendly the Southern Europeans are than we Anglophones. And it is true that no less a body than the UN Committee on the Rights of the Child has criticised the UK for our “general climate of intolerance and negative public attitudes towards children.”

Yet to put the contrast down to cultural differences is too quick. We Brits flock to Spain and Italy in our millions, in part because of their residents’ relaxed approach to the enjoyment of their public places. Architects and urbanists from Jane Jacobs through Holly White to Jan Gehl have celebrated the social life of urban spaces. The lively, playful, diverse, self-regulating, economically active urban square is close to being the holy grail of city planners the world over. Indeed my nearest square, whose playful fountains I profiled here a couple of years ago, is hesitantly reaching towards that goal, helped by a newly opened Spanish café (appropriately enough).

My hunch is that if Plaza Nueva were magically teleported from Bilbao to (say) London it could still thrive as a joyous place for people of all ages, backgrounds and classes – but only if the powers that be were brave enough to resist the temptation to regulate, control and squeeze every last square metre for commercial gain. In other words, our failure to create such spaces is not down to a hostile culture. It is down to a failure of vision, and of nerve.

10 responses to “Playful urban spaces: a lesson from Bilbao”