“Those rocks in that well are too dangerous.”

Here in Australia, I recently visited Bubup Nairm, City of Port Phillip’s newest family and children’s centre. Opened in April this year, it brings together a range of childcare, health and family support services in a state-of-the-art hub building with a $A 15m [£10 million, $US 14 million] price tag. It is an impressive place. But it has not had the easiest of starts. I was told that just a few weeks after it opened, a four-year-old child was hurt and ended up in hospital. She and another child had been handling some rocks in a stone well in the garden, and a rock slipped out of one child’s hands and fell on the other’s, breaking her finger.

Not surprisingly, the parents were very upset. They wanted the rocks removed. Immediately.

Centre coordinator Mel Edwards took a different view. She had seen how the children’s learning had been stimulated by the rocks. “For adults,” she says, “a rock is just a rock. But for children, a rock can be a new pet. It can be a loaf of bread. It can be a hill for pixies, or a piece of treasure to be coveted or bartered.” Children were drawn to touch, lift and play with the rocks, and the variation they found – the subtle differences in feel, weight, size, shape and colour – was a source of constant fascination.

So Mel stood her ground: the rocks had to stay. In her view, the accident was just that: an accident. Yes, the fact that one child’s hand was in the wrong place at the wrong time was unfortunate. But in and of themselves, the rocks were not dangerous. They were certainly no more hazardous than many other items that might be found in a nursery (or a home) – toys, chairs, books or pots or pans.

The centre’s management were initially nervous, but came around to back Mel’s stance. One thing that helped was the supportive material about risk in Australia’s National Quality Standard for early learning and childcare (published in October 2011). One statement says that educators should “plan learning environments with appropriate levels of challenge, where children are encouraged to explore, experiment and take appropriate risks in their learning” (element 1.2.2,  p.43).

It is not hard to see why the parents would have been upset. Not only did their child end up going from daycare to the local hospital. But also, from their perspective, the cause was something that was avoidable. After all, rocks are not exactly standard items in an early years setting. In these situations, it is almost inevitable that the parents will want to be told that their child’s pain could have been prevented. They will want to be reassured that ‘this will never happen again’. 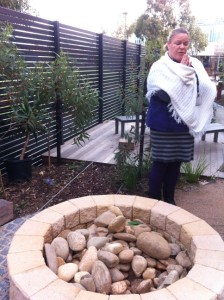 Mel by her well

Yet if we are to take a balanced, thoughtful approach to risk, we need to take a step back from the emotions that arise in the aftermath of painful events. Yes, the rocks did play a part in the injury. But let’s remind ourselves of a couple of facts. First, while broken fingers are no fun, the child has made a full recovery – as with almost all such injuries. Second, she (and the other children in the centre who heard about the incident) will have learnt to be more careful in future with holding and lifting the rocks – and also other weighty household objects. Mel argued that if we tried to remove all heavy items from children’s everyday lives, how would they ever realise that they need to take care when handling them?

Building a sound, balanced, thoughtful approach to risk is not easy. For it to work, the approach needs to be supported all the way up and down the chain of command: from front-line staff through managers, health and safety officers and politicians up to state and federal regulators. And of course, ultimately parents need to back the approach, and to understand its implications.

This chain of command is only as strong as its weakest link. This is why the statements from the NQS (and here in the UK, the statement on risk in play from the Health and Safety Executive) are so valuable: they provide a vital supportive view from the ‘higher-ups’.

The parents of the child in question struggled to accept the centre’s stance, though in the end they did. Parents do not all take the same view on safety (as I have noted before, in another post with an Aussie anecdote). Settings may have to accept that they will anger, upset, or even lose some parents, if they are to stand firm on their values and ethos. But it is worth remembering that even the parents of those children unlucky enough to get hurt sometimes come around to accepting that no-one was to blame – as I wrote in recounting a similar story from the UK.

So I think that Mel and the centre management were right to stand their ground. But decisions like this can be difficult. One of the reasons why risk-benefit assessment is so valuable is that it enables educators and service providers to weigh up the pros and cons in a considered way – without the shadow of a recent incident hanging over them – and where appropriate, to document their thinking. Then if an incident happens, they can show that they have been reasonable.

My feeling is that this is one of those judgements where readers may have different views. I have shared my thoughts. What do you think? Is it reasonable to have rocks – including quite large rocks – in an early years setting? Or is this an example of where the risk-benefit balance comes down on the side of caution? As ever, I would welcome your comments.

28 responses to ““Those rocks in that well are too dangerous.””