Street play: can you have too much of it?

I have written before about street play, and plugged the Playing Out project, whose community-based approach to opening up streets for play is spreading fast. A couple of weekends ago I witnessed a whole Playing Out session from beginning to end (and you will have the chance to see the edited highlights on primetime TV [Update Weds 3 July 2013: watch a clip from this blog post of mine]). It was a thrilling event, welcomed and enjoyed by people of all ages. But while I shared their enthusiasm, I was left wondering if the sheer energy of the occasion could paradoxically weaken the initiative’s prospects. I’ll come back to that thought later – but first, let’s set the scene.

The session took place on a Sunday afternoon in Westcourt Road, a  residential street in the South Coast seaside town of Worthing (where the nearest park is on the other side of a main road and an unstaffed railway level crossing). It began at 3 pm with two pairs of volunteers in hi-vis jackets blocking both ends of the street with ‘Road Closed’ signs and wheelie-bins. Within a few minutes the street was filling up with children of all ages enjoying the space. Not surprisingly bikes, trikes and scooters were popular. Other games sprang up too, including keepy-uppy, catch, tennis and a 2-a-side ball game in a tiny chalked court whose rules were not familiar to me.

Drawing on the street with jumbo pavement chalks was another big hit. (By the end of the session, one gang had written a number along the whole stretch of the street. It had 1,300 digits, they said – and was apparently meant to tell people the entry charge for the event.)

After an hour or so, there must have been 40 or 50 children in the street, and a similar number of adults. The overall scene was not unlike a crowded beachfront.

It was fascinating to watch how people of all ages negotiated the space in their groups, casually interacting with each other as and when they felt the need or the inclination. People found connections with each other: a girl aged around eight made friends for the first time with her four-year-old next-door neighbour, and spent much of the session shepherding her around. Two older women (both of whom were there on their own) discovered a shared link to a neighbourhood in Liverpool, where they had both played out in the street.

As the session went on, the vibe became a little less intense. Parents and other residents sat on the kerb, or pulled out tables and chairs for an impromptu picnic. Pre-prepared cakes were shared out, and (in a glorious echo of some exotic Middle Eastern street market) one couple set up a falafel stand. Their children had grown up some years ago, but they still valued the chance to get involved. (The falafels were free, and very tasty!) 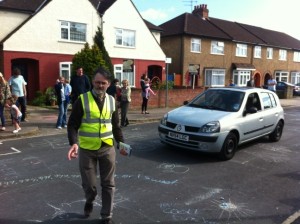 Once or twice, a resident’s car was shepherded in or out of the street at walking pace by one of the volunteers. From what I could see, drivers were not troubled at all by the procedure. Other drivers, who may have expected to be able to drive along the street, simply followed a short diversion (although Westcourt Road is a through street, it was very straightforward to avoid the closed stretch).

I was blown away by the impact of the Worthing road closure. The numbers of people out in a short stretch of street spoke volumes about children’s appetite for outdoor play, and about adults’ wish to feed this appetite. 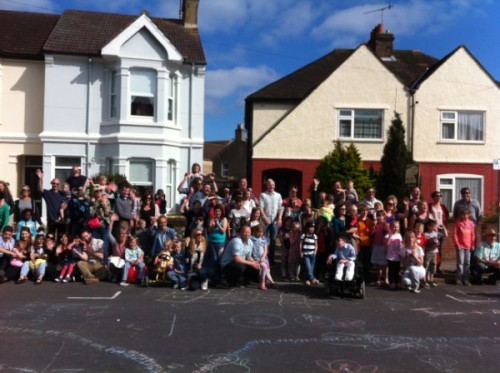 The whole event was filmed by a team from the BBC1 magazine programme The One Show, which plans to air a piece on street play on Monday 24 June (declaration of interest: I am down to make an appearance in the film).

The filming had been set up with help from the Playing Out team. Intriguingly, they tried hard to persuade the programme-makers to visit a street that had run a few sessions, rather than a first-time street. One of the reasons is that for Playing Out, the long-term aim is to normalise street play. That is precisely why they aim for repeated, regular sessions, and why they tell organisers not to go to town with bunting, bouncy castles, and cake stalls. They are well aware that first-time sessions almost inevitably have a celebratory air – and a level of participation and energy – that is not an accurate picture of the long-term pattern. With regular sessions, once the novelty has worn off, the numbers of children are likely to decline somewhat, and the nature of their play is likely to become less frenetic.

I am sure the One Show feature will generate a lot of interest, and highlight the scheme’s obvious qualities. But I think the Playing Out team is right to have concerns. The project places great emphasis on good community engagement, and is aware of the issue of resident anxiety about noise and disruption. The danger of the high-impact, energetic first-time road closure is that it may feed some people’s worst fears about what regular street play sessions might lead to.

Not everyone is sold on the idea of lots of kids filling their street. Some are going to be actively hostile, and probably just don’t like children. For instance, check out some of the comments after this misleading news story, about a Reading street play initiative. But others may be undecided – and having a realistic sense of what regular road closures for play will be like will help win them over.

What is more, the idea of promoting community spirit – rightly seen as a positive outcome of street play projects – needs to be handled with care. Many, perhaps most streets have at least a few residents who have little or no interest in their neighbours’ lives. For them, home may be the place where they literally and figuratively close the door on the outside world. Appeals to community spirit will cut little ice with such people. While we may disagree with their world-view, we cannot and should not dismiss it out of hand. This point is nicely made by Kevin Harris in his always-readable Neighbourhoods blog, when he talks of how street parties can create a ‘sense of enforced sociability’.

It may seem that I am conceding too much ground to the opponents of street play. After all, over the last few decades children have metaphorically watched through their windows as their most important play space has become ever more colonised by adults and their cars. Is it not high time to compensate them for this loss – even if it leaves some grown-ups very unhappy?

I can see the force of that argument. But I believe what is needed is an approach that is more consensual: one framed around mutual rights, responsibilities, respect and fairness. This is quite apart from the tactics: very unhappy adults are often a powerful and effective local lobbying force, so it is good sense to avoid picking a fight, if possible.

So my plea to those who like the idea of street play, and who are interested in promoting it – which probably includes most of you reading this post – is to think carefully about the way you make your case. Opening up residential streets for the everyday enjoyment of the children who live there is reasonable, achievable and desirable. Of course, we need to point out the obvious benefits to children and families, and the fact that there are gains for the wider community too. We are more likely to make progress if we give a realistic picture of what regular street play looks like, if we accept that there are differing viewpoints about that slippery concept ‘community’, and if we try to understand and respond to legitimate concerns.

PS: there is a nice back-story to Worthing’s scheme. Local mum Kathryn Kay first heard about Playing Out from my blog a couple of years ago, and was taken by it. When Kathryn and her family moved to Worthing, she decided that taking forward the idea might be a good way to meet new people and get more involved in her community. Adur and Worthing Councils were supportive, so she organised some sessions in her own street – and they were so successful that she is now helping other street groups too, including the one I visited. It’s a powerful illustration of community action – and I must say it was nice to hear this example of my work making a difference!

21 responses to “Street play: can you have too much of it?”