Can ordinary people turn a car park into an urban park? 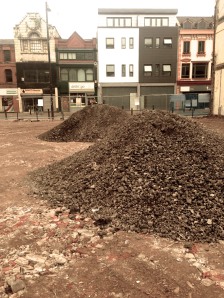 Have you ever looked at a piece of derelict land in your area and thought “that could make a nice spot for a park” – and then felt your spirit fall as it sits boarded up for years, or worse still, gets turned into a temporary car park? Manchester resident Sam Easterby-Smith has, and has decided to do something about it. He has created Parkstarter: a crowd-funded, pop-up park creation scheme. And he wants to try it out in his home city.

Sam’s target is what he calls ‘zombie car parks’ set up by developers to make money out of sites that were cleared for redevelopment during the boom years, but that now lie empty. He says that in Manchester,

“They are everywhere, spilling out from the city centre in all directions through Ancoats and Salford and Hulme. Planning permission doesn’t seem to be much of a consideration, let alone health and safety of potentially hazardous sites. No liability for loss or damage either. We think there are better uses for these spaces. We think they could bring tangible economic benefits to the surrounding neighbourhoods. We think they could be places of beauty rather than environmental disaster-areas sucking more cars into our city. We think they could be a sustainable legacy for our children and their children.”

Sam has set up a website on tumblr, and is looking to crowd-fund a lorry-load of turf and create his first park in the next few days.

The idea of playful guerilla-style urban interventions is nothing new, of course. But I love both the simplicity and the ambition of Parkstarter in challenging the commercial interests that dominate the way cities are shaped. With experts predicting that we are falling out of love with the car, what better way to improve a neighbourhood than to convert parks for cars into parks for people?

Moreover, while Parkstarter’s approach reflects today’s digitally-connected world, there are echoes of pre-internet campaigning. Back in the 1990s Methleys Neighbourhood Action, one of the pioneering community groups behind the campaign to introduce people-friendly ‘home zone’ streets to the UK, turfed over a street in the neighbourhood over the 1996 August Bank Holiday.

The resulting media coverage played its part in building support for the home zone idea, both locally (where the area became a permanent home zone in 2002) and nationally (with the creation of a £30 million Government pilot programme and new legislation).

Could Parkstarter have the same impact? Who knows – but it is surely worth a shot (and perhaps a punt, especially if you live or work in Manchester).

Acknowledgements: thanks to my friend Sue Cook for bringing Parkstarter to my attention. Methleys image taken from the Methleys Neighbourhood Action website (now moribund, it seems).

One response to “Can ordinary people turn a car park into an urban park?”