There are paedophiles in the bushes 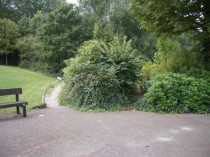 In this guest post, Eleanor Image describes how she took up the trusty sword of truth, and vanquished a myth. Eleanor is Play Development Worker at Play Association Tower Hamlets (PATH). Tower Hamlets, in East London, includes some of the most disadvantaged parts of the capital.

This is a story about a myth. What’s a myth? The thesaurus on my computer lists myth under two headings: legend; falsehood. Synonyms for ‘legends’ include: fables, fairy stories and sagas. Synonyms for ‘falsehoods’ include: fiction, illusion, invention, fabrication and untruth.

The myth here is that paedophiles hide in bushes in Tower Hamlet’s parks waiting for children.

The context for this true story is that PATH delivers outdoor play projects in Tower Hamlets housing estates, and has been working with the local authority’s architects and planners to develop new play spaces. As part of that project I met an intelligent architect who asked to meet me in one of the play spaces that was to be refurbished. She had some questions she wanted to discuss.

‘What kind of equipment do children and young people use and like? And what would make this space more playful?’ she asked.

I replied, ‘increasing the amount of greenery would be good. Plant more bushes for hiding in. A mature tree included in the space adds a lot, so can a willow tunnel, grass slopes, and much else. These all create play cues for children to engage with their environment.’

Of course she could see this vision and agreed it sounded playful and environmentally pleasing but for one problem:

The paedophiles hiding in the bushes!

This architect is mainly office based. She does not work with children but does read newspaper stories. She certainly would not want her play space design to result in children being snatched and abused. Who would? She had also been told by a member of the parks department that there were indeed paedophiles in the bushes. ‘Too risky! I just can’t do it,’ she said.

Myth-buster on a mission

I knew that the paedophile in the bushes story was a myth, but a powerful one. To kill this beast of a myth, I thought, I need to have a fact-filled sword. I had to become a myth-buster!

So, now I’m on a mission to get some London Borough of Tower Hamlets statistics. First stop, the Community Rangers.

As the manager of the Community Rangers, over the past two years, how many reports have there been about paedophiles being in bushes? (These have to be actual situations where they have been moved on or arrested and we can look at how a paedophile is defined once we have actual figures.)

With regards to paedos hiding in bushes, I have looked through my incident reports and there aren’t any reports relating to this in the last two years.

He checked all incident reports filed over the last two years and found there had been none. He put me in touch with Sergeant Matthew Smith from the Met police department that deals with sex crimes.

Rather than e-mailing him, I rang him, the better to be able to discuss the matter. He was most helpful and thought that the idea that paedophiles hide in the bushes was ridiculous.

We had a long conversation which he was happy to summarise in writing and to talk to others if needed. He told me that they do find masturbators on trains and often at windows, but he didn’t think that it made sense to stop train services or not to let children walk down streets because of this. (We need also to note that public masturbators and ‘flashers’ should not automatically be grouped with paedophiles. Myth-busting requires a respect for key distinctions.)

Dear Matthew, it was really good and refreshing to speak to you last week. It would be brilliant to have it backed up in writing whenever you have the time I would really appreciate it. For me to be able to quote a police sergeant in conversations of fear when people in the community or designers say I shouldn’t be recommending designing in bushes or letting children play in them would really help. Thanks so much for taking the time to talk to me and thanks in advance for your reply.

Sorry for the delay in replying. We have over 150 registered sex offenders on this borough a third of whom are in custody. Only one of these offenders has a conviction for a sexual offence that is connected to hiding in bushes, however this offence was not connected to children. I am not aware of any highlighted concern, intelligence or evidence that is linked or connected to your plan to construct a children’s maze. Intrusive and robust supervision of a facility of this kind will assist to deter any likely offenders as it will in any playground etc. Would you like me to put you in contact with our Crime Prevention officers who are experts in this field and may be able to assist with planning etc? If any of your partners wish to discuss this matter further then please feel free to supply my contact details and I will be happy to talk to them. Is this sufficient?

No individual’s fault, but a shared responsibility 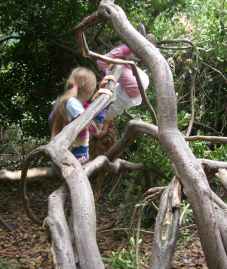 This story doesn’t seek to blame any individual who has passed on a myth- all parties are doing their jobs and responding to information given or passed on to them with the best of motives.

But too many people are scared of things that are not true: that are myths. We hear all sorts of stories as to why children can’t have a more playful environment. We need to forge our own fact-filled swords, and keep challenging myths that prevent children playing.

Acknowledgements: My thanks to Eleanor for letting me reproduce her story. Also thanks to Bernard Spiegal of PLAYLINK – who first posted Eleanor’s piece – for his support in giving me the chance to share it here.

5 responses to “There are paedophiles in the bushes”