It’s time to take a thoughtful approach to bullying

In a post on her ‘Free Range Kids’ blog last week, Lenore Skenazy questions whether the US is in the midst of a ‘bullying crisis’. She quotes statistics from a piece in the Wall Street Journal that showed dramatic declines in both the fear of attack (down from 12% in 1995 to 4% in 2009) and actual victimisation (where rates have fallen fivefold). The figures, from the National Center for Education Statistics indicators of school crime and safety, are shown in the graphs below. 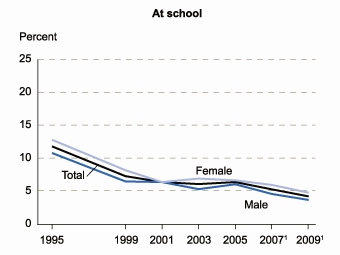 The timing of the Wall Street Journal piece is significant, with a hard-hitting documentary on bullying about to open in cinemas across America. Anyone who watches the trailer cannot fail to be moved by the plight of the young people featured. Yet there is a danger that our well-meaning efforts to protect children from bullying may be wrong-headed, even counterproductive.

As Lenore says, “to pretend there’s an epidemic when in fact things are getting better is to both over-react AND sell our kids short.” She adds: “to lump together unbearable harassment with minor teasing is just a mistake.” I agree, and think this second point is crucial.

Let me be quite clear. Bullying – the repeated, systematic victimisation of the weaker by the stronger – damages lives. It needs to be tackled, not downplayed or ignored. Children’s online lives have created frightening new opportunities for bullying. Perpetrators can remain anonymous, while attacks can be permanently recorded and shared instantly around the world.

Yet if bullying is to be tackled effectively, we need to distinguish between it and more minor fallings-out amongst children. The problem is that this boundary is being blurred. Children, parents and professionals are all misdiagnosing minor incidents as bullying, as I show in my book No Fear.

What is more, some of those working in bullying are also blurring this distinction. For instance, one peer-reviewed research article defined bullying as “any form of victimization or harassment perpetrated by another child or young person.” [Sadly this quote, from the full text, is behind a paywall.]

The inevitable result, as I know from the reaction to my talks to educators, is that teachers and schools are being put under pressure to respond to many incidents as if they were more serious than they really are. Witness the school that banned best friends, as described here a couple of months ago. It is not always easy to decide whether a single event is part of a wider pattern of bullying or not. Sometimes though, the right thing to do is to hold back and see how situations unfold.

Bullying is an emotive topic that provokes polarised responses, as I learnt myself when No Fear was published. But surely there is one thing we can all agree on. We need to strike a balance between protecting children from threats, and giving them the freedom they need to learn how to look after themselves.

My fear is that talk of a ‘bullying crisis’ – which flies in the face of the statistics – makes it harder to strike that balance. That in turn may make it harder – not easier – for children to learn for themselves how to handle all kinds of challenging social situations as they grow up.

Postscript: I would really like to know the story behind those remarkable drops in levels of fear and victimisation, as shown in the graphs above. Does anyone have any ideas?