When did you last play hide-and-seek? (Part 2)

Back to that Saturday night game in our friends’ home. We played for over an hour. My abiding memory is of the tingly thrill throughout my body when I was hiding. My breath quickened. My limbs were taut. My muscles strained with the effort of keeping still.

It seems to me now that what I was feeling was quite close to what children feel when they are truly immersed in the emotions that arise when playing games – especially physical games. I felt myself to be in the grip of the same fears, the same joys, the same thrill of victory and the same pang of disappointment from defeat. In my determination not to be found, all other concerns faded into the background.

For us grown-ups, it can be an effort to play such games, as I acknowledged in Part 1 of this post. But for children, actively seeking out thrills and emotional uncertainty is their experiential food and drink. My teenage daughter and her friend were very keen to keep playing (“just one more round, please?”)

Some of those at the forefront of research on play argue that emotional intensity is not simply a consequence of playing. It is, in a sense, what defines the process of playing. For the academic Brian Sutton-Smith – whose book The Ambiguity of Play is at the apex of modern play scholarship – all play ultimately revolves around ‘affect expression and regulation’.

The suggestion is that when children are playing, whatever the surface appearance of their games, at a deeper level it is their own emotional life that is being explored. Hide-and-seek is one case study of this process. But there are plenty more. Play fighting, rough-and-tumble play, horseplay, dizzy play, dare games and the sharing of ghost stories are all obvious examples.

Sutton-Smith also argues that this impulse for emotional stimulation is instinctive. The young of our species are drawn to create states of heightened emotion for themselves as a result of evolution, he thinks, because of its adaptive benefits. In a striking phrase, he declares – on the very last page of The Ambiguity of Play – “I define play as a facsimilization of the struggle for survival as this is broadly rendered by Darwin”. Playwork academics Stuart Lester and Wendy Russell make a parallel claim when they state that risk-taking in play is centrally to do with ‘being in control of being out of control’ (see their publication for Play England Play for a Change summary report [pdf link] p.24 and note 12).

These arguments about the intimate connections between play and the emotions were familiar to me. I must confess I am still wondering whether all play involves the emotions in quite such a fundamental way. In any case, playing hide-and-seek brought this home to me: many of children’s games only begin to make any kind of sense when their emotional aspects are properly appreciated. 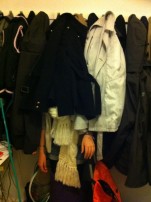 PS some might say that if playing hide-and-seek marks a high point in the emotional intensity of my weekend, then I need to get out more. But I say: don’t knock it till you’ve tried it.

PPS I remained unfound at the end of the last round, hidden behind a coat rack, within touching distance of my seeker. Is it wrong to take pride in that achievement?

Like Loading...
This entry was posted in play and tagged Brian Sutton-Smith, hide and seek, indoor play, play. Bookmark the permalink.