The school where kids can build dens

Last week I visited a school where the students can build dens freely, any time they want, during breaks between lessons. In case you were wondering, Berwick Fields Primary School in City of Casey, Victoria, Australia is not a Steiner School, or a progressive private institution. It is a state school (and a large one, with over 1,000 students on roll).

The den-building area is relatively small – perhaps ten metres by fifteen – and is on the edge of a sandy wetland (where the children can also dig ditches and make rivulets). Any child from year 2 (around 6/7 years old) upwards can take part.

My guide on the visit, environmental education teacher Adam Surmacz, said that the den-building was not an adult idea: it originated from children’s spontaneous activity. “A couple of years ago, some building work had been going on in the school grounds,” he told me. “Children started borrowing left-over construction materials like pallets and scrap timber, and using them for their own building projects.”

To its credit, the school reacted not with alarm, but with interest. Staff could see that good things were happening. Some made connections with their own childhood memories of playing in the creeks, bush and vacant lots of their neighbourhoods.

Two years on, the activity is still popular. Some vertical timber posts have been added, to aid construction (including an intriguing set of poles, decorated by each year group). The only rule is that dens have to be demolished at the end of each session. This is to allow more children to take part. Before the rule was introduced, children were starting to get territorial about their cubbies. (This rule does seem a pity, as it obviously limits the scope of the children’s ambitions. I wonder if there isn’t another solution. But with a large student population, a small area and high demand, it’s easy to see that ensuring fair access is a challenge.)

Interestingly, in Berwick Fields all the children are on break at the same time – an admirable position that allows children of different ages to cooperate on their construction projects. Many schools in the UK now have age-segregated break times, and in Australia some have age-defined playground ‘zones’ too, marked out with painted lines. This practice is often driven by anxiety about the negative influence of older children on younger ones. But it creates problems of its own, since it deprives students of different ages of the chance to learn how to get along with each other.

Principal Stephen Wigney explains that the den-building offer reflects a wider educational philosophy. For him and his team, the school’s job is not just to promote formal attainment, but to allow the children to learn and grow. “Our approach is about looking beyond academics and educating the whole child,” he told me. “It is about giving our students the chance to discover their passion – to find out what matters to them. Not everyone here will become a brain surgeon or a leading politician. But everyone needs to know what it feels like to have a sense of accomplishment.”

It is clear even from a brief visit that Berwick Fields has a strong belief in children’s abilities and capacities, and in the value of allowing students to take an active role in forging connections with what is around them. The school curriculum emphasises the importance of the environment and sustainability (it secured a Stephanie Alexander Kitchen Garden Foundation grant, for instance, and has an impressive kitchen garden and kitchen classroom). 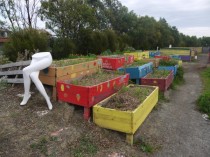 Visually, the school grounds display the kind of quirky playfulness that I associate with the best adventure playgrounds. One growing bed is adorned with the bottom half of a shop dummy, while a string of shoes and boots decorates a prominent boundary fence.

Berwick Fields may be unusual. But it is not unique. In the UK, the ‘playpods’ initiative supported by Bristol Scrapstore shows what can happen when loose parts are brought into the playground.

There is widespread concern about children’s engagement with nature, their levels of physical activity and their opportunities to learn through experimenting and taking risks. So it should be obvious that the approach of Berwick Fields is worthwhile. Yet the majority of schools take a very different view.

In many schools, play and break times are seen as a problematic part of the day. What is more, they are being squeezed. When I was in primary school, we had three break times, with an hour for lunch. Today, most UK schools have just a morning break and perhaps forty minutes at lunchtime. Robust academic research confirms this picture of declining free time in schools. A pair of studies [pdf link] by Peter Blatchford at London University’s Institute of Education shows that the time given over to breaks has fallen steadily and significantly in recent decades. In the USA, the very idea of recess is under threat.

At the same time, of course, children’s everyday freedoms in the rest of their lives have been in steady decline. Hence, their free time at school becomes even more important, since for many children it is the only chance they have to enjoy the face-to-face company of their friends and peers – and it is also a vital opportunity to learn how to deal with everyday social situations.

We can guess the reasons for this anxiety in schools – safety fears, and growing pressure to show their impact, using only narrow academic measures. So how do we move the debate on from these barriers, and promote a positive vision of children’s play in school? I would love to hear your ideas.

Note: ‘den’ is the usual British English term. Aussies call them cubbies. Americans know them as forts. We all know from our own childhood what we are talking about. The language of play crosses boundaries of space and time.

Photo credits for images of children: Adam Surmacz.
Not to be copied without permission

20 responses to “The school where kids can build dens”