What prospects for this playful addition to my neighbourhood? 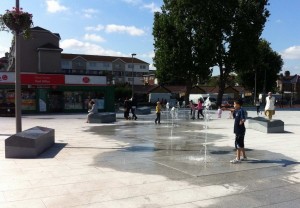 Back in Walthamstow after some time away, we discover that today the Council has opened a refurbished square in our local shopping street. As you can see from the photo, it includes a row of fountains.

It looks to me like these fountains have been designed to be played in. The water nozzles are recessed to ground level, with their own drainage pools. What’s more, the jets are programmed. One second they are off, then they start up gently, then they get a bit higher until they reach almost to head height. 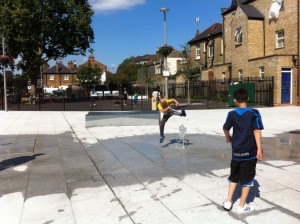 After a chilly few days, the sun has come out over east London. Sure enough, local children are on hand to take advantage of the sunshine and play around in the water. One boy waits for medium-high jets to hurdle over. Who knows, perhaps he’s picturing himself in the (rather more grand) Olympic Park a few miles down the road. Another boy zig-zags through the whole line while they are on full power. A young girl on her micro-scooter enjoys whizzing through a puddle, dodging the splashes. 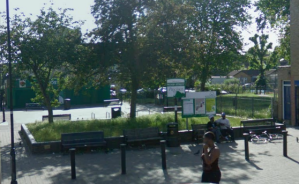 We’ve only lived in this part of town for a couple of months, so we don’t know what the square used to be like. Google Street View shows a sad raised grassy bed with some trees. The Council’s own consultation leaflet [pdf link] describes this as a ‘green area used as a dog toilet.’

I’m interested to see how the new ‘Wood Street Plaza’ (as the Council bills it) fares. The manager of the nearby Post Office is not optimistic. He suspects that kids will mess up the fountains soon enough – perhaps with soap suds, as happened at a nearby scheme some years ago.

I hope not. It is easy to be cynical, as shown by some of the comments in my local paper before the scheme was even finished. But the Council and its design team deserve credit for recognising that a good water feature can lift everyone’s spirits, and for taking the brave step of trying to introduce some playfulness into a public space that previously had very little going for it.

The truth is, the fountains are the square’s saving grace. If they survive, I can foresee the space becoming Walthamstow’s beachfront. It is almost like a bit of the magic of Somerset House has rubbed off on a humble corner of E17.

I’ll keep an eye on Wood Street Plaza, and keep you posted on its prospects. In the meantime, what are your thoughts about the design?

9 responses to “What prospects for this playful addition to my neighbourhood?”