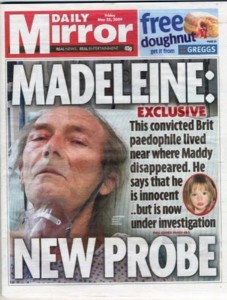 What role does news coverage play in shaping the way we think about the risks children face? Is a diet of bad news really bad for us, and if so, what can we do about it? These questions were on my mind after Monday night’s engaging debate on modern childhood organised by my old employers the National Children’s Bureau (NCB) to launch its 50th anniversary celebrations.

I asked a question from the floor about the decline in children’s everyday freedoms over the past generation or two. This led to the following exchange on twitter:

I am taking @indoorplaymag’s comments at face value – setting aside any interest their author may have in painting a negative picture of the outdoors – because I think they reflect a widely held view. Many people believe – because they read it in the news every day – that the world beyond our front doors has become much more dangerous to children. And many parents and educators struggle to know how to react to news, both in the everyday decisions they make about children and in response to children’s own questions.

Coincidentally, this weekend’s Guardian featured a gloves-off attack on news by Rolf Dobelli, a best-selling writer, thinker and entrepreneur. He argues that too much news is just as bad for us as too much food. You could say he has added the condition of ‘News Consumption Disorder’ to the list of modern ailments (I jest, but only a little).

Dobelli’s key argument is that news “leads us to walk around with the completely wrong risk map in our heads.” There is good evidence to show how news skews our beliefs about how often bad things happen – such as this American study [pdf link] which shows that people who watch “crime-saturated local television news” have an increased fear of crime. 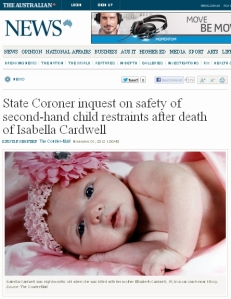 News coverage also skews our understanding of why bad things happen. For a breathtaking example, see this Australian news story about the tragic death of a young baby in a car crash. The report leads on the fact that the mother had apparently incorrectly used a second-hand child restraint. It is only ten paragraphs later that the report reveals the fact that the car, which was being driven by the father, crashed because it was “travelling at 118 km/h as it approached the bend, despite signage advising motorists to slow to 40 km/h.”

Another tragic event – again from Australia – gives a chilling illustration of what can happen when we have the wrong risk map. This story involved a baby in a stroller, who rolled down a slope into a river and drowned after her mother had been momentarily distracted answering a phone call. She was convinced her son had been abducted. So the early search efforts looked in the wrong place and possibly (though this cannot be known for sure) missed out on the chance of saving the child. I cannot help but note the echoes with another illustration of skewed risk: the case of two-year-old Abigail Rae, which I described in No Fear. The toddler had escaped unnoticed from her nursery, and was found soon afterwards drowned in a nearby pond after falling in. During the inquest it emerged that a man passing by had seen her wandering the streets on her own, but did not stop to help, because he was afraid of being accused of abducting her.

Recent years have also seen a collapse in levels of trust of all forms of media, as political commentator Peter Kellner showed in this piece from last November. Kellner’s figures pose the question of why anyone would defend their assessment of danger by pointing to news coverage. The reason, I believe, is that growing numbers of people are losing contact with the everyday world around them, so the media is almost the only source left.

I explained in simple terms how this works in an interview with Decca Aitkenhead after the publication of No Fear. A generation or two ago, people based their views about risk on a wide range of sources drawn from across their everyday lives, including their own experiences of being out and about, friends, and neighbours, as well as a much less intrusive media (never mind the internet: let’s remember that 24-hour rolling news only came into the mainstream in the last decade). Today, to quote local government spokesperson Councillor David Simmonds from last night’s NCB debate, life for many has “retreated behind the citadel of the family.” People spend ever more of their time in homes, in cars and out-of-town supermarkets, rather than in local shops, streets and public spaces. Deprived of a mix of information sources, all that many people hear is the ever-growing klaxon of doom-laden news stories.

So what is the cure for News Consumption Disorder? For a start, we can check the facts. To its credit, the Channel 4 News website did just this in the aftermath of the unfolding tragedy in Machynlleth last November. Focusing on the threat from strangers, its careful review of the evidence led to this reassuring conclusion:

“There is no evidence that the most serious crimes against children are on the increase. There’s no statistical reason for parents to be more worried now than in previous years. And in absolute terms, cases of abduction, homicide and serious sexual assault remain, mercifully, very rare.”

Of course, the facts show that the strangers who pose the greatest threat to children are those behind the wheel of a car. In 2008 [pdf link] for instance, 91 children under 15 were killed on the roads. By comparison, there were 23 homicides (and as I show in No Fear, most child homicides are committed by parents and members of the extended family, not by strangers). The comparative lack of media coverage of, or debate about, road danger is itself a telling example of news bias. For the record, I believe that – unlike the threat from strangers – it is a danger that parents are right to be concerned about.

Dobelli has a radical cure for News Consumption Disorder: simply stop consuming news altogether. For many, this will be an excessively extreme prescription. So here is my more balanced five-step antidote for parents and educators (drawing in part on a previous post of mine on this theme):

Step 1: realise that you can feel sympathy with people who have suffered terrible loss, without forever having to see the world through their eyes.

Step 2: seek out the facts behind the scare stories.

Step 3: take the time to dig deeper into the issues that matter to you.

Step 4: stay alert to the agendas of news outlets themselves, and maintain a critical stance towards what they serve up.

Step 5: help children to put the news they hear into perspective, and help them to understand why and how the media wants to frighten us with so much bad news.

Oh – and there’s one more step: get out of doors more, with and without your kids.

Update Thursday 18 April 2013: The NSPCC today launched a report which suggests children are in some respects safer today. One of its key findings is that “the child homicide rate is in decline and fewer children are dying as a result of assault or suicide.” The Daily Telegraph covered the report here, and states that overall, it “shows a significant long-term decline in violence against children in comparison with previous decades, contrary to public perceptions.” The report was also covered in today’s Daily Mail, under the headline “Thousands of children abused in their own homes are not being protected by local authorities, damning NSPCC report warns”. It did not mention the declining trend in violence, abuse and neglect.