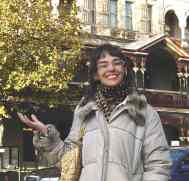 Last week I spent some time with Lenore Skenazy, and took the opportunity to interview her. Lenore is well known to many readers as the author of the blog and book, Free Range Kids. An experienced journalist, Lenore famously found herself at the centre of a media frenzy in 2008, when she wrote a column about letting her then 9-year-old son go home on the New York Subway on his own.

You describe yourself as a journalist, and also as ‘generalissimo’ of Free Range Kids. Do you see yourself as, at heart, a writer who has an angle, or a campaigner who uses writing to achieve her goals?
I’m a journalist first and foremost. I have been writing for newspapers for 20 years or so, including a long stint as a reporter for a big New York tabloid, the NY Daily News. I still write for Readers Digest and The Wall Street Journal, and I’ve got a syndicated newspaper column.

That said, I do feel I have a new role with Free Range Kids, to challenge all the fear that parents have to swim through. What’s neat is that my background in journalism means I am very used to checking facts about stories. I’m willing to contact the head of the Crimes Against Children Research Center to find out the true numbers of children who are abducted each year. And guess what: it is miniscule. The latest numbers showed about 115 children kidnapped by a stranger, and 50 killed. Terrible, yes. And yet in a country of more than 300 million people, the odds of this happening mean that you would have to keep your child outside, unattended, for 750,000 years before it would be statistically LIKELY for them to be kidnapped. Moreover, our crime rate today is lower now than when most of today’s parents were playing outside as kids.

Tell me about your TV show, World’s Worst Mom. How has that worked out?
It’s been fantastic. It has given me the chance to work directly with families. The parents are so worried about what might happen to their kids that they are terrified of giving them the tiniest bit of freedom – letting them play on the front lawn, or walk to school, or use a public rest room — and they’re equally terrified of being blamed if anything goes wrong. So I set up a really simple activity for the kids – like them going to the store without their parents to buy milk and bread – and we film it. And I tell the parents that if it goes wrong, I’ll take the rap and they can blame me (of course it never does).

When I bring the video of the kids over to the parents and they see what their kids are capable of – the change is incredible. The parents had become so used to treating their children like helpless babies. But there their kids are, walking – sometimes SKIPPING — to the grocery, or whatever. And the spell just breaks. Suddenly, instead of fearing for their kids, they are proud of them. And sometimes ecstatic.

I hear the show is doing well in England, and popular in Latin America. But most fulfillingly, it has made a huge difference to the families who were actually on it. Out of 13 families, 12 have changed – and many are still in touch.

Do you worry that all the ‘bad news’ stories you share on your blog may in some senses make the problem worse, because they paint such a paranoid picture?
Of course I don’t want to make people afraid, and a lot of the stories I highlight aim to criticize the authorities, such as Child Protective Services. Some of these agencies have such an inflated idea of danger that they are interfering in families who are giving their children a regular safe life – just not as obsessively safe a life as the authorities believe is necessary, since they have an inflated view of crime.

I also have a ‘clearing house’ role in the media for these kinds of stories. Lots of journalists follow my blog. And somebody has to point out what is going wrong. It’s like, at the beginning of feminism, if someone kept highlighting stories of women passed over for jobs they were qualified for. My goal is not to say, “So don’t even TRY, honey.” It’s to get folks mad enough to demand reform.

What are the similarities – and the differences – between the USA and here in Australia?
I can’t really say. I’ve only spent a week or so here in Bendigo, and a week in Sydney on my last visit. But I have seen quite a few kids walking and cycling to school here, which is a good sign.

Where was your favourite place to play when you were a kid?
I spent a lot of time on my quiet suburban block and at the local park, mostly jumping rope or looking for four-leaf clovers. In New York the other day I passed a playground and two grownups were turning the rope for their girls to jump. Really? Parents don’t even make their kids hold their own jump rope anymore?

You often say in your blog that community is the key to Free-Range parenting. What do you mean by that?
It’s simple really. My message to parents is, “Meet your neighbours. Trust the world. Assume that most people are okay. Get outside.” When people do, it’s the same thing that happens on my show: Reality breaks through the scrim of fear. Unless you are living in a Taliban stronghold, chances are you will be delighted when you go out and connect with the neighbourhood you CHOSE to raise your kids in. You moved to a NEIGHBORHOOD, with its dogs and parks and people. Enjoy it!

What about Government and politicians – don’t they have a role?
Absolutely. I’m getting more interested in policy – something that has surprised me. If policies are fear-driven and end up making things worse, you have to try to change them.

One example is the obsession with sex offenders. Take Megan’s Law, which in most states means that the addresses of convicted sex offenders are publicly available. There are now commercially available mobile phone apps that map out their addresses. Looking at a map with lots of red dots makes people terrified of their neighbourhoods. It also ruins the lives of many of the ‘red dots’ – a lot of whom are no threat to children at all. They may be a 19-year-old who had consensual sex with his 15-year-old girlfriend (that’s considered statutory rape), or a guy who was convicted for peeing in public. So what we need is a law that identifies where DANGEROUS people are living, not just anyone who ran afoul of our increasingly draconian — and sometimes ridiculous — sex offender laws. Policy must change, and that begins (once again) with a reality check!

What about the role of planning and transport policies – for instance the way so many neighbourhoods, towns and cities are designed around the needs of car drivers, rather than kids?
I love the idea of towns that are more pedestrian-friendly. Have you heard of the Popsicle Test? [Tim: yes I have!] A town is considered good for kids if a child can leave her house, go buy a Popsicle and eat it by the time she gets back home. What this really means is that a town works if there are safe sidewalks, easily negotiated intersections and a mixture of residential and commercial buildings. Best of all: If a town DOES pass this test, it’s better for everyone, including the elderly!

Have you considered taking on any roles with NGOs or campaigns? If not, why not?
Not yet. But I’d love to. I’m always looking for new roles and new ways to help kids enjoy an un-helicoptered childhood. If parents trust their kids in the world, the kids have more freedom and so do the parents. Win-win! Any group that is working to explain this to legislators, or change laws to reflect this, should give me a call!

What difference do you think it has made to your kids that you take a Free-Range approach?
Well, my sons are 14 and 16 now. The 16-year-old does a lot on his own, but he was already pretty independent, even before I started Free-Range Kids. (And by this I mean he always closed his door a lot!) What’s exciting for me is that my 14-year-old FINALLY has started going to the park near his school on the weekends, just hoping he’ll find some other kids there to play basketball with. And he always does! And they don’t pre-arrange it and no one has organized a league and he doesn’t know everyone’s last names – they’re just fellow boys who show up and play. It does my heart a lot of good. (And probably his even more so!)

What would you say if you found yourself in conversation with President Obama in an elevator?
I’d say to him, “Your wife has made it her mission to tackle child obesity. And  she doesn’t endorse playing out unsupervised. She should.”

Don’t forget: Lenore is promoting International Take Your Kids To The Park And Leave Them There Day. Why not mark the occasion yourselves? On Saturday, May 19, bring your kids age 7 or 8 and older to the local park at 10 a.m. Hopefully there will be a whole gaggle of kids awaiting them. When you leave, they’ll have to do that age-old activity that has grown out of favour: Play!! They’ll have to come up with something to do, without your input, or a coach’s, or any other adult’s. With any luck they’ll have so much fun, they’ll do it again the next day – WITHOUT a national holiday! 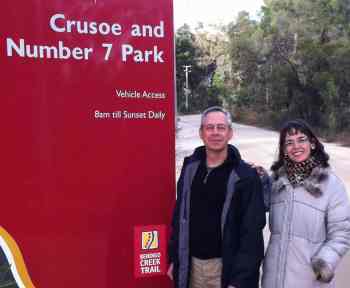 Lenore and Tim reconnect with nature in Bendigo