Snow 1, Snapchat 0 – and why this result matters

Last Sunday it snowed round our way. For the first time in years my neighbourhood – like much of London, the South East and beyond – woke up to a blanket of fresh, snowball-perfect snow. And guess what: children went outside and played. They sledged. They made snowmen and snow angels. They had snowball fights. 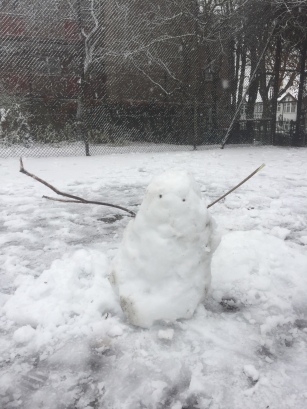 To repeat: children went outside and played.

To expand: a generation of small people who are – it is said – addicted to screens and technology, stepped away from said screens and… went outside and played.

What do we take from this? One: children are not as addicted to tech as we think they are. Two: children have not forgotten how to play. Three: children will play out, if what is beyond our front doors is enticing and welcoming enough.

It is clear that children do not play out as much as they used to. And – a few grumps aside – most people agree that this is A Bad Thing.

As for the reasons behind this decline, many people put all the blame on parents. I don’t.

But while the story behind the decline in outdoor play is complicated, the role of one factor – tech – is becoming ever clearer.

I used to argue that children’s love of screens and gadgets was as much a symptom as a cause of the problem. And I still think there is some truth in this. Children have a huge appetite for stimulation and social contact. And if they are denied the chance to feed their appetite for experience IRL [In Real Life], they will feed it online.

However, times are changing. We now have the smartest, most highly paid people on the planet, and the biggest global corporations, devoting huge sums of money to keeping us all on screens for as long as possible.

We can all bear witness to the growth of the attention economy. And a growing number of us do not like what we see. Tellingly, this includes some of those very same smart, highly paid people.

So if we want more children to spend more time outdoors and active, and less time indoors in front of screens, then reigning in the tech giants is part of the solution. But only part.

We also need to look at the other side of the attention economy, namely the ordinary world beyond the internet. We need to look at parks, and schoolyards, and streets, and neighbourhoods. And we need to ask: how attractive is this ordinary world to children, really? We need to ask: how easy is it for parents, when they peer out of their front doors, to let their kids outside to have some fun with their friends?

We grown-ups need to up our game. We need to make it really fun for children to play out, and really easy for parents to let them. We need to put up a fight for our children’s hearts, minds and spirits.

And if you think this sounds like too big an ask, just remind yourself of the last time it snowed, and maybe you will think again.

(With a nod to the great Dutch architect and play champion Aldo van Eyck, who had things to say about cities, snow and children.)