Is snow the ultimate plaything?

Over sixty years ago the architect Aldo van Eyck, who weaved outdoor play into the fabric of war-torn Amsterdam, was inspired by seeing how, after a snowfall, children came out of their homes and claimed the city’s spaces for themselves. Even today nothing gets children of all ages out of doors faster, or in greater numbers, than a decent layer of newly fallen snow.

Why is fresh snow such a universal draw? Surely the answer lies in its exceptional qualities as a material for construction and destruction. The invitations, offers and affordances of snow are extensive, inclusive and democratic. Anyone capable of moving their arms and legs can make a snow angel. No assembly instructions are required. 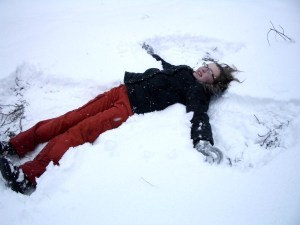 Babes-in-arms are by turns delighted and mortified by its touch and feel. Toddlers barely able to walk can get a taste of what it means to make their mark on the world, implanting footprints in the ground, then admiring the impressions they have made. Five-year-olds can make a snowball in five seconds, and a snowman (or woman) in five minutes. Eight-year-olds can conduct whole street fighting wars, safe in the knowledge that the worst battle injury they are likely to sustain is a face full of icy powder. (Not fun, but hardly life-threatening.) Teenagers can strut their stuff for hours building monstrously oversized snow boulders.

Snow is easy to make stuff with, but it also offers real challenges. Building an igloo demands perseverance, practice and a degree of architectural flair. Yet snow is a forgiving substance: you would have to try very hard indeed to build anything that risked life or limb.

I wonder how many children would trade all the toys and gadgets under their Christmas trees for a regular supply of construction-grade white stuff? That is why this winter, I hope you get the chance to appreciate that most creative, engaging and magical of loose materials, snow.

Have a great festive season.

8 responses to “Is snow the ultimate plaything?”